1.    The Opera House was opened by the British Queen.

Sydney Opera House is one of the most distinctive and famous buildings in the world. Construction began in March 1959, and it took 14 years before being opened by Queen Elizabeth in 1973.  The opening ceremony included fireworks and a performance of Beethoven’s 9th Symphony.

The Queen has visited a further three times since – the most recent was with Prince Philip in 2006.

Sydney Opera House was originally designed by the Danish architect, Jørn Utzon, but was completed by an Australian design team. The smallest venue is named after him. Seating 210 people is the Utzon room.

The original estimate was just $7 million!  Now that’s what I call over-budget!

7.    Prokofiev was the maiden composer at the Opera House.

The first public performance at the Sydney Opera House was Sergei Prokofiev’s War and Peace.

8.    Most people don’t come to the Opera House to watch opera!

Each year, approximately 2,000,000 people come to watch a performance at Sydney Opera House. However that’s just a small percentage of the visitor numbers Sydney Opera House attracts each year – it was recently recorded at over 11 million people!

The building is huge – its highest point is 67 meters tall, and its 120 meters wide and 185 meters long – more than 100 football pitches could fit inside! 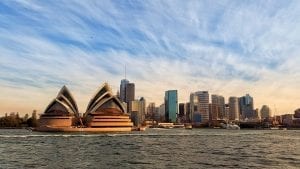 10. There are no bigger attractions Down Under.

Sydney Opera House boasts an incredible 1,000 rooms – but just seven of these are venues. The largest venue is the Concert Hall which seats an audience of 2,679.

12. The Opera House is a modern heritage appointee.

In 2007 it was included in the UNESCO World Heritage list.

How many staff are employed at Sydney Opera House?

Why did the designer of the Sydney Opera House choose to construct the roof in the form of sails?

The Danish designer, Utzon, took inspiration from his love of sailing! Located near to the waters edge of Sydney, many boats, some with sails, pass close by.

Do you know any fun facts about Sydney Opera House?  Share them in the comments below!