The Alps represent a small part of a sporadic mountain chain that extends from North Africa’s Atlas Mountains through southern Europe and Asia to beyond the Himalayas.

With their breath-taking views, the Alps have been attracting people for thousands of years. Climbers love to discover and enjoy the Alps’ more challenging peaks and regular tourists can be satisfied with merely following the safer trails through this picturesque mountain range.

Are you eager to learn more about this fascinating landscape? If you are, read these fun facts about the Alps, and get ready to be amazed…

The Alps came into existence 65 million years ago, as a result of a collision between the African and Eurasian tectonic plates. Even so, the Alps are Europe’s youngest mountain range and its believed that people have inhabited this mountain chain for 60,000 years. 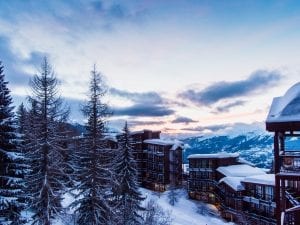 The Alps region attracts more than one hundred million people to the mountains every year! But in the past, it was a distant location with difficult living conditions that most people were happier avoiding. In fact, the Alps drew some interest in the 18th and 19th centuries when artists, poets and writers, as well as nature lovers started flocking to it. It was around this time that the Alps became popular for climbing.

In 1800, Napoleon crossed one of the mountain’s passes, quite a task, knowing the fact that he had an army of 40,000 men with him. He led his army across the Alps in a military campaign against the Austrians which ended in their loss in June at the Battle of Marengo. This achievement was commemorated through a painting by the French artist Jacques-Louis David.  Napoleon crossing the Alps is actually a series of 5 equestrian portraits of Napoleon Bonaparte, painted by David, between 1801 and 1805.

Battles fought within the Alps during World War II, such as the Second Battle of the Alps (1945) have partly attributed to raising the interest in visiting the area. This caused a rise in tourism in the Alps after WWII.

Ötzi also called the Iceman, a mummified man believed to be 5,000-years-old, was discovered in the Ötztal Alps on the border between Austria and Italy, in September 1991. The Iceman is in fact, a natural mummy of a man who lived between 3400 and 3100 BCE. 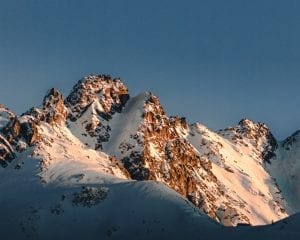 6. The highest and most extensive mountain range system

Stretching across south-central Europe, the Alps are the highest and most wide-ranging mountain range system. In fact, the Alps extend at around 750 miles or 1,200 kilometres in a crescent shape through eight Alpine countries: France, Switzerland, Monaco, Italy, Liechtenstein, Austria, Germany, and Slovenia.

They are divided into Eastern and Western Alps. Owned by France, Switzerland, and Italy, the Western Alps, are higher with a shorter, curved central chain, while the Eastern Alps can be found in Italy, Switzerland, Austria, Slovenia, and Germany.

Standing at 4,800 meters above sea level, Mont Blanc is the highest of all the peaks in the Alps. Even though it’s the tallest, Mont Blanc isn’t the only peak that exceeds 4,000 meters in height. In fact, there are roughly a hundred of them, known among the people as “four-thousanders”. 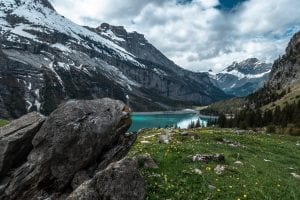 Glaciers and a permanent blanket of snow persist beyond 9,000 feet above sea level. Speaking of glaciers, back in 1876 the Alps glaciers covered an area of 1,817 sq. km. By 1973, the area covered by glaciers had decreased to 1,342 square km. 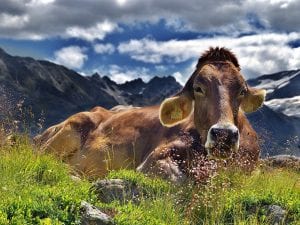 10. A strong influence on Europe’s climate

No wonder the Alps have a strong influence on the climate in Europe, as they constitute 11% of Europe’s surface. The location of this mountain range, as well as the huge variations in its elevation and exposure, gives rise to great climate differences, not only among distinct ranges but also within a particular range itself.

There are 13,000 species of plants and 30,000 species of wildlife that have been discovered in the Alps that range from marmots to brown bears and snow fleas that have adapted to the harsh conditions. Other notable creatures living in the Alps include the goat-like chamois and the ibex. 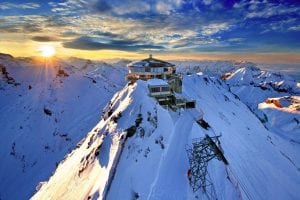 Crystals like cinnabar and quartz can be found throughout the Alps. In fact, the Swiss Alps are known for their giant Smoky Quartz crystals that were discovered by Franz von Arx and Elio Mulle.

The Alpine region continues to have a solid cultural identity and the Alpine villages are still known for their traditional culture of farming, cheese making, and woodworking. While the region is home to 14 million people, the tourism industry that has been growing since the 20th century brings around 120 million annual visitors. 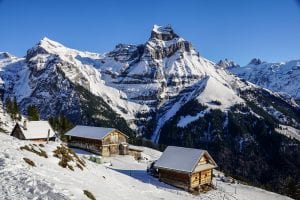 14. The biggest city in the Alps

Grenoble is referred to as the capital city of the Alps. With a population of 500,000 citizens, it is the biggest city in the Alps. In fact, the city is situated in the Auvergne-Rhône-Alpes region of south-eastern France, at the bottom of the mountains among the Drac and Isère rivers. Grenoble is famous as the base for winter sports, as well as for its museums, universities, and research centres.

Do you know any fun facts about the Alps? Share them in the comments below!

Are you fascinated with mountain ranges?  Check out these facts about the Rocky Mountains…