Ever ridden a train quite as speedy as the Bullet Train? It’s a stunning feat of engineering, and what’s more, millions rely on the technology day after day. Here’s 11 fun facts about the Bullet Train to inspire a visit of your own!

1. What’s the official name of the Bullet Train?

2. It mainly runs from city to city.

While the Shinkansen travels all over the country, you’ll find that it runs between Osaka and Tokyo most of all. That’s because this tends to be a hotspot zone for commuter traffic. It only takes ten minutes to load up and set a bullet train off to its next destination. You can travel as far as Hakata, from Japan’s capital Tokyo, in less than five hours.

Shinkansen has been a part of the Japanese transport industry since 1964. It was at this time when the most popular route, the aforementioned Osaka to Tokyo connection, was first established. This covers a stunning 320 miles! 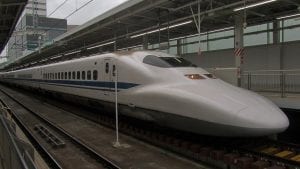 4. No trains are faster.

The Shinkansen is still thought to be the fastest train network and service on the planet. The London Underground doesn’t even come close. It’s thought that its nearest competitors are the French TGV line and Germany’s famous InterCity Express. However, the Japanese bullet train system is still leagues ahead in terms of speed and coverage.

The Shinkansen is well-known for its colossal tunnel booms. This is where shockwaves build up in the tunnel, and which led to huge explosions of noise when the trains leave either side. This has led to plans to try and dampen or quieten the noise, such as setting up extensions. Believe it or not, these booms aren’t just noisy – they could cause serious damage, with the ability to knock other passing trains off their tracks.

6. Japan is working on reducing noise.

This is why there continues to be such an emphasis in Japan on reducing city noise. It’s not rare for you to find sound barriers and noise pollution restrictions in place around the many cities Shinkansen travels through.

7. They are likely to be record holders.

The speed of the Shinkansen bullet trains have changed over the years. Believe it or not, they once reached speeds of up to 130 miles per hour. However, many trains on the network now operate at speeds faster than 200 miles per hour, putting them on target to be some of the fastest civic transit vehicles on Earth.

8. City links are made much easier.

Despite the sonic boom effects that the trains create, they have helped to enhance Japanese productivity from city to city no end. It’s thought that more than 400 million hours have been saved in productivity alone simply from the presence of the bullet trains across Japan.

9. There are many different types of bullet train.

There are actually 18 different types of Shinkansen! These can vary from the Nozomi, the Asama and the Toki, through to the Yamabiko, the Tsubame, Hayate, Tanigawa and Hiraki. These trains are split up into different classes, largely based on speed and availability. 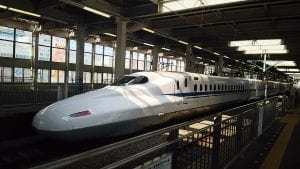 Bullet trains are so called because – as you might guess – they are super aerodynamic, and if you’ve ever seen one leave a tunnel, the comparison to a gun barrel is all too obvious.

Despite its intense high speeds and intensive safety measures, the Shinkansen is amazingly reliable. It’s likely that a bullet train won’t ever be delayed for longer than 24-30 seconds.

FAQs about The Bullet Train

How much will the next bullet train connection cost?

Bullet trains to Nagoya are in planning stages - and they will likely cost roughly $90 billion to bring to life!

Who invented the bullet train?

The bullet train was the brainchild of Hideo Shima, who is widely credited with helping to revitalize Japan after the war.

Is the bullet train the best in the world?

Many passengers regard Japan’s bullet train system as one of the best on the planet - for speed and reliability.

Do you know any fun facts about the Bullet Train?  Share them in the comments below!