Often seen as some of the most precious jewels and artifacts the UK holds, the Crown Jewels are closely-guarded coronation staples – and even though you might want to get your hands on them, there’s absolutely no chance you’ll succeed! The Crown Jewels are world-famous, and while they might have been the subject of many a movie and TV plot centering around a heist or two, there’s actually more to the jewels than their incredible monetary value.

Here are more than a few fun facts about the Crown Jewels likely to fascinate you!

1. There’s a massive diamond in the center.

The State Crown, the centerpiece of the Jewels, is said to hold one of the biggest diamonds on the planet. It’s said to weigh around 314 carats! It’s called the Second Star of Africa. Where’s the First Star of Africa? In the scepter, of course!

2. There are two cuts from the same diamond.

Both Stars of Africa were cut from the same diamond, the Cullinan Diamond – which is thought to have been the biggest rough diamond ever discovered, weighing in at 3,906 carats.

3. The Crown Jewels first started their display when Cromwell was overthrown.

The display of the Crown Jewels only really came into effect after the reign of Oliver Cromwell. The infamous Lord Protector, who of course helped to temporarily abolish the monarchy, had the original jewels and regalia melted down. Therefore, the current Jewels are in fact the second staple, and they’ve been given a full exhibition ever since.

In fact, there is one item in the original collection thought to have survived Cromwell’s wrath – and believe it or not, the sole survivor is a spoon! That’s because a private buyer – Clement Kynnersley – gave the artifact back to King Charles II when he regained the throne for the monarchy. 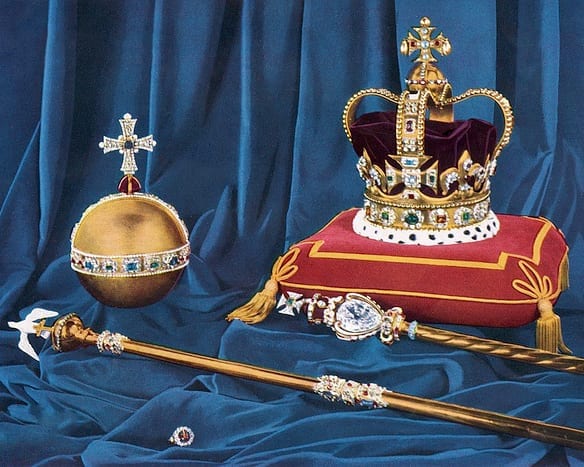 4. The Queen has to rent the Crown Jewels!

Believe it or not, it’s not the reigning monarchy who has ownership of the Crown Jewels. They technically belong to the State itself, which means that they are rented out to the Queen!

The Crown Jewels not only boasts headwear and scepters, but also sapphires and cuffs – as well as the famous orb, which is a look that’s been borrowed and aped many, many times.

6. They are always on the move.

The Crown Jewels rarely stay on exhibition for long, as they are commonly moved out for special events and ceremonies. Such is the life of ceremonial jewels – they are carried to and fro through intensive guarding and patrol.

In fact, the Crown Jewels are largely held in the Tower of London and are looked after by beefeaters and yeomen who patrol the Tower.

Rental of the Crown Jewels, at least during the time of Queen Victoria, used to cost around four percent of the assumed value.

8. King Edward took his crown with him!

King Edward VIII, who of course abdicated the throne in the late 1930s, actually took his crown with him when he decided to marry Wallis Simpson. The Prince of Wales Crown eventually made its way back to the main collection, though only after the King had died.

9. There’s a custom crown in the collection.

There is a crown in the collection which has only been worn once, and it was made for a very special occasion. The crown in question is the Delhi Durbar Crown, worn by King George V in honor of India’s inception into the realm in 1911. 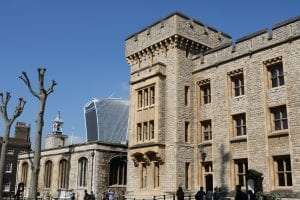 The Crown Jewels are on display in the Tower of London.

In typical British fashion, the Crown Jewels were snuck away in biscuit tins to hide them from the Nazis during the Second World War! However, these weren’t on display in the kitchen – they were held in a secret chamber beneath Windsor Castle.

12. Few people can handle the Jewels. 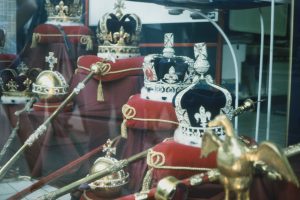 13. There have been plenty of attempts to steal the Crown Jewels!

Many have tried to make away with the Jewels and have failed. The closest call, it seems, occurred in 1672, when thieves trying to steal the collection were brought to justice before the Jewels could leave the Tower Wharf.

FAQs about The Crown Jewels

How much are the Crown Jewels worth?

At last valuation, they are thought to be worth somewhere in the region of $4 billion!

Are the Crown Jewels really up in the Tower of London?

Much of the time, yes - under strict guard! However, they are moved around a lot for various ceremonial occasions.

Are the Crown Jewels fake?

No - but they aren’t the original jewels, as Oliver Cromwell had the set melted down when he took power. A new set was made after Richard Cromwell abdicated.

Do you know any fun facts about the Crown Jewels?  Share them in the comments below!