1. The Great Barrier Reef is a landmark down under.

The Great Barrier Reef is located off the coast of Queensland, Australia.

There is no denying that this reef is massive, with almost 3,000 individual reefs, 900 islands, and spanning over 2,600 km. It can even be viewed from space!

The reef is home to a wide diversity of species, including 6 species of turtle, 17 species of sea snake, 30 species of whale, porpoise and dolphin. 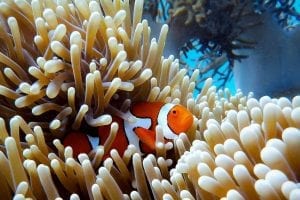 4. The Reef is under serious threat.

Climate change is one of the main threats to the Great Barrier Reef. The rising temperatures of the sea alone leave the coral susceptible to bleaching (and eventually death). Tourism also plays a negative role, as many damage it, leave rubbish behind and contaminate the water (e.g. sun cream).

5. No one’s really sure how old the Great Barrier Reef actually is.

The Great Barrier reef could be up to 20 million years old!

6. Planning a trip? Come during Christmas.

It’s better to visit the Great Barrier Reef during the winter months, as the scorching temperatures and stingers of the summer can be off-putting. November to May is typically known for the stinger season, and you’ll most likely have to wear a stinger suit to swim, and you’ll only be able to swim in certain enclosed areas. However, water and air temperatures are still pleasant in the winter, and you’ll most importantly avoid jellyfish encounters!

7. There are some seriously old residents out here.

Although some structures of the coral can date back millions of years, so do some of the creatures that live there too! Nautilus, a distant cousin to the squid, dates back to up to 500 million years. One of the surprising facts about these creatures is that it has stayed mostly unchanged across millions of years.

8. It’s a protected zone despite the damage.

The Great Barrier Reef was designated a UNESCO World Heritage site in 1981. It is the only place with two World Heritage Sites, together with Daintree Rainforest located in Cape Tribulation.

The Great Barrier Reef is pretty shallow, with an average depth of 35 meters. Great news for divers! Scuba divers and snorkelers can explore at leisure as most of the corals and fish grow near to the surface, where there’s more light.

10. You can explore the Reef right here, right now. Seriously!

Google’s underwater Street View will let you virtually explore the Great Barrier Reef from your sofa!

Real-life Nemo (from the Disney movie Finding Nemo), the wayward clownfish, is pretty easy to find in the reef.  You’ll easily spot them hiding among the anemones they call home.

FAQs about The Great Barrier Reef

What is the greatest mystery of the Great Barrier Reef?

No one knows the true age of the Great Barrier Reef - dating the material the reef is composed of is extremely difficult due to how it has been worn and replenished over time.

Is the Great Barrier Reef recovering?

There is evidence to suggest that conditions for the Great Barrier Reef to start recovering have been fairly healthy in the past two years - great news!

Is the Great Barrier Reef one of the Wonders of The World?

It’s one of the designated Natural Wonders of The World - and it’s highly protected as its own piece of World Heritage!

Do you know any fun facts about the Great Barrier Reef?  Share them in the comments below!

Are you fascinated with the underwater world? Check out these amazing facts about coral reefs