The 1666 fire that raged on for almost five days and left more than 85% of the population homeless. Here are some interesting facts about The Great Fire of London…

1. The fire spread largely thanks to building manufacture.

Buildings were mainly made of wood at this time in London. They were also packed together tightly across narrow streets. Combined with the strong easterly wind, the conditions were perfect for the fire to spread rapidly.

2. It all started on Pudding Lane.

The Pudding Lane house of Thomas Farriner is where the fire started. It is believed a spark from the oven had fallen into a pile of fuel at 1 am in the morning. Most of the people in the house were able to clamber to safety. Unfortunately, one of the maids could not escape and was the first victim of the Great Fire.

Most people tried to gather as many belongings as they could and fled to the river, trying to get out safely, while others rushed through the gates of London to the fields outside.

3. Pepys led the way to save London.

Samual Pepys is the person that famously first informed the King of the fire, and who recommended that the homes its path be pulled down to halt the fires’ progress. 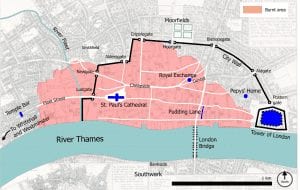 The fire threatened the Tower of London, but extra fire engines were ordered to be sent there to prevent the Tower’s destruction. The wealthiest citizens of the city stored their valuable belongings in the Tower for safekeeping.

5. Many other buildings, tragically, didn’t.

13,200 houses and 87 churches, including St Paul’s Cathedral, was destroyed in the Great Fire. The church took nearly 50 years to rebuild.

6. The blaze was impossibly hot.

7. The overall death toll is likely larger than we are aware of.

Surprisingly, only six people have been recorded to have died from the Great Fire of London. However, there are no records of the deaths of working-class people. Therefore, the death toll is very likely to be significantly higher.

8. The fire led to big changes in building regulations.

After the blaze, the city was built with brick and stone instead of wood, and legal reforms were introduced. Some believe that the Great Fire was an important key that spurred long-lasting improvements which made London the city it is today.

9. The fire came hot on the heels of the plague.

The Great Fire had unfortunate timing, as the city was still recovering from the last outbreak of plague, which claimed over 15% of the city’s population. 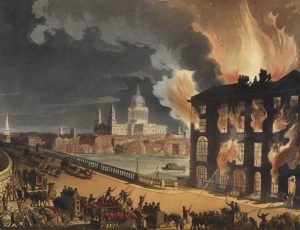 To commemorate the Great Fire, a monument was built. It’s a Doric column and is located near London Bridge. It’s simply known as ‘The Monument’.

FAQs about The Great Fire of London

Why was the Great Fire so important?

Many historians claim that the Great Fire ‘rebooted’ London amid its suffering from plague and pestilence.

Was the Great Fire of London an act of terrorism?

No one’s quite sure - but people alive at the time certainly thought it was a terror attack rooted in religious fervour. We may never know for certain.

Who started the Great Fire of London?

It’s thought to be an accident that started in the home of Thomas Farriner, a baker who lived on Pudding Lane. However, a French watchmaker called Robert Hubert claimed to have started it - when he had nothing to do with the blaze.c

Do you know any fun facts about The Great Fire of London? Share them in the comments below!

This page was last modified on December 3, 2021. Suggest an edit