There are 12 Gods and Goddesses most frequently referred to in Ancient Greek Mythology – these are known as the Olympians, and while there are four other deities that many refer to in the same line, it’s this dozen you will likely hear about the most!

Here are some fun facts about Greek Gods, as we take a look at each of the Olympians in turn.

Apollo was a son of the most powerful God – Zeus. Best known as God of the Sun, Apollo was believed to have many talents and was also therefore known as the God of Healing, Music, Dance, Poetry and Archery! He was also considered a powerful healer – but could inflict disease, too!

Artemis was Apollo’s twin sister. Goddess of Hunting, she is often depicted carrying a bow and arrows with a dog by her side. Artemis was also thought of as a protector of animals, particularly bears and stags.

3. Aphrodite brought love to the world.

Aphrodite is known as the Goddess of Love, Beauty and Fertility. She is usually depicted in one of two ways – either emerging from the sea on top of a sea shell, or in a serene pose surrounded by birds and/or roses! 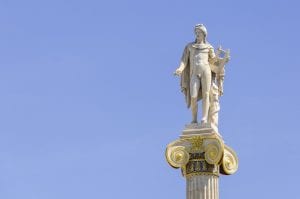 Ares, a further son of Zeus and his wife Hera, was perhaps not worshipped as much as his siblings. He is often depicted with a stern appearance, usually holding a blood stained spear – what else would you expect from the God of War?

5. Athena lent her name to a few well-known phrases!

Athena is known as the Goddess of Wisdom – in particular, battle strategy! Depicted with olive trees and owls, Athena is usually shown wearing armor. Today, we use the expression ‘extending an olive branch’ – meaning ‘to suggest peace’, and owls in the expression ‘as wise an owl’. Both phrases call back to Athena.

Demeter is known as the God of Agriculture and Harvest. It was believed he controlled the seasons and growth of crops.

7. Dionysus was fun to be around.

Dionysus is known as the God of Fertility, Wine and Theatre. It was believed he was the first to cultivate grapes and produce wine – he is often portrayed with wine jugs and grapes.

8. Hera was the Queen of the Olympians.

Hera, was the wife of Zeus. Queen of Marriage, she ruled over other Gods with her husband – she was thought to be a powerful protector and could wreak vengeance on bad influencers! She was particularly associated with women, families and birth.

Hermes was the youngest of Zeus’s children. He could fly – and is often depicted with wings on his helmet and boots. He was credited with being athletic and trustworthy – ideal then as the Messenger God! 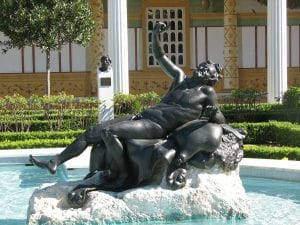 A Statue of Dionysus

10. Hephaestus got to work.

Hephaestus is known as the God of Fire. Married to Aphrodite, his specialty concerned sculpture and metalwork – he was especially revered by blacksmiths and craftsmen. It is suggested he was made lame because Hera threw him from Mount Olympus!

Poseidon was the brother of Zeus. Extremely powerful, Poseidon is also known as God of the Sea – sailors often prayed to him before embarking on a voyage, as he was thought to have the power to influence their safe passage.

Zeus is known as God of the Sky and King of Olympus, above all Gods and Goddesses. Zeus is an imposing figure – it was felt his mood could influence the weather!

In addition to the 12 Olympians, there are four lesser Gods – Cronos, the God of Time, and Uranus, the First Ruler. 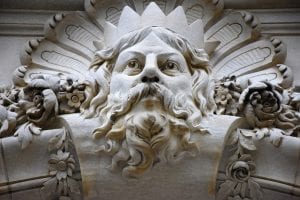 Who was responsible for killing Zeus?

It’s a trick question - no one had the honor of killing Zeus, as he was immortal!

Who were the three most powerful Gods in Greek Mythology?

Zeus, Poseidon and Hades were all considered the most powerful of all the Gods - and this is despite Hades not being an Olympian!

In a shock twist, Zeus killed Poseidon with a throw of a thunderbolt - upon Hades’ request!

Do you know any fun facts about the Greek Gods? Share them in the comments below!

Are you fascinated by the Greek Gods? Check out these glorious facts about Greece