The Gulf of Mexico is one of the most beautiful corners of the world, and yet most of us only know about the tourist hotspots it has to offer. Well, those days are finally over with these fun facts about the Gulf of Mexico – just what you need to liven up your day!

It’s the 9th largest body of water in the world.

2. It’s got quite a few neighbors.

The Gulf covers 600,000 square miles and is bordered by the USA, Mexico, and Cuba.

3. Its coastline is impressive. 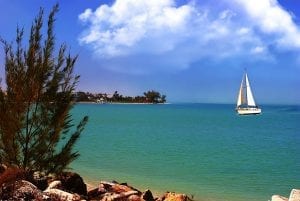 It was formed when continental plates collided 300 million years ago.

The sea floor then sank to create the rest of it, with half of it still largely made up of shallow waters sitting on top of continental shelves.

5. You’ll likely never get to the bottom of it!

6. It was first widely explored only a few centuries ago.

Amerigo Vespucci was the first European to explore the Gulf, doing so in 1497.<

It contains five million acres of wetland that’s home to thousands of species of fish and birds.

8. Birds come and go here all the time!

During peak migration season there will be hundreds of millions of birds in the air above the Gulf each day.

9. You can go whale spotting with ease. 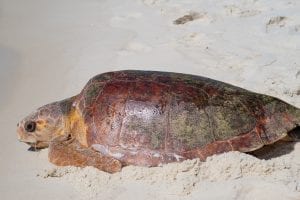 There are 5 species of endangered sea turtle currently still in the Gulf.

They tend to try and stay away from the 49 species of bloodthirsty sharks that are on the move all the time!

Seaweed patches grow so large you can see them from space.

60% of all brown pelican breeding takes place on the Mexican Gulf Coast. 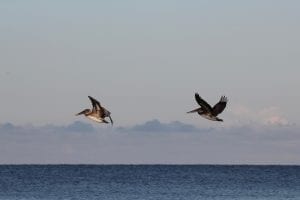 Coral reef patches are common off the coast of Florida and grow by up to 7 inches a year.

14. There are plenty more fish in the sea!

They are home to more than 6,000 species including fish, starfish and sea cucumbers.

FAQs about the Gulf of Mexico

Why is the Gulf of Mexico not an ocean?

A gulf is technically a body of water with three distinct land borders - oceans are wider open.

Is it safe to swim in the Gulf of Mexico?

For the most part, yes - though you’ll need to stick to the beaches on the front.

Why is it called the Gulf of Mexico?

The name conundrum has gone on for many years, though it’s largely derived from the original Spanish, Seno Mexicano.

Do you know any fun facts about the Gulf of Mexico?  Share them in the comments below!