If there’s a Scottish island more enchanting than Skye, you’re likely going to be hard pushed to find it! Skye is one of the most popular isles with historians and visitors to Scotland, and it certainly has its place in literature going back centuries. Before you head there, make sure to read up on a few fun facts about the Isle of Skye…

1. The water might give you a new lease on life!

The Isle of Skye is famous for its whiskey. You’ll be able to take tours of Talisker, for example, which is one of Scotland’s most popular distilleries and whiskey brands.

One of the most striking landmarks of the isle is the Neist Point Lighthouse, which is a windswept location out on the rugged shoreline. It’s no longer operational, but it’s still a pretty imposing figure, on the whole! 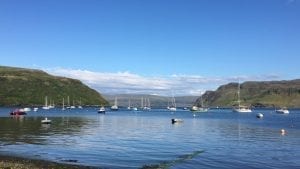 The Isle of Skye is, famously, where author Ian Fleming created the character of James Bond. It’s also where some of the movie Skyfall, the 23rd Bond movie, was filmed.

If you’re fascinated by dinosaurs and prehistoric beasts, you’ll love that you can easily find prints of dinos from millennia past here. It’s thought that dinosaurs once roamed the island some 165 million years ago, and the beaches at Staffin are prime spots for you to see prints to prove they were here.

Scotland is well-known for its castles, of course, but Dunvegan is one with a bit of a record behind it. It’s currently home to the clan MacLeod, and it’s the oldest castle in Scotland that’s still habited.

7. The Skye Bridge is younger than you might think.

The Skye Bridge, which connects the island to the mainland, first opened in 1995. The toll prices at the time were said to be extortionate!

8. ‘Skye’ might also mean something different to what you imagine.

The name of the island, Skye, is thought to be a translation of the word ‘ski’ from Norse, which means ‘cloud’.

9. It’s an enduring, yet tiny settlement.

The Isle of Skye is thought to be home to less than 10,000 people. However, it’s been a settlement since the very start of human civilization. 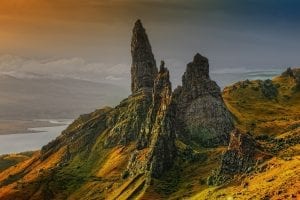 Skye mainly trades in whiskey and tourism, however, it does also have a strong agriculture trade.

The isle is home to the famous Faerie Glen, which legend states is where, as you can imagine, you are supposedly able to spot fairies. The exact location of the glen, apparently, is a well-guarded secret – so if you go on a tour there, you won’t be given the directions on route!

Portree is the capital of Skye, and much like the rest of the island, it is fairly sparse when it comes to population. You’ll only find around 2,000 people living here, though it still welcomes plenty of visitors each year. 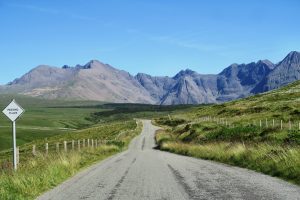 FAQs about The Isle of Skye

What makes the Isle of Skye so popular?

The Isle of Skye is massively popular thanks to its breath-taking scenery - you’ve never seen mountains out here quite like them before!

How can I travel to the Isle of Skye?

It’s possible to get to Skye via Inverness, the city that’s known as the capital of the Highlands - you can get there via public transit!

Which films were shot on the Isle of Skye?

Skye has played host to all kinds of movie magic - from Stardust to The BFG, Snow White and The Huntsman - and even one of the Transformers movies!

Do you know any fun facts about the Isle of Skye?  Share them in the comments below!