They’re one of the UK’s best kept secrets, but now is the time to shine a light on them and show the whole world just what’s on offer. Here’s some fun facts about The Isles of Scilly…

1. What is Scilly, officially?

The Isles of Scilly are actually a chain of islands known as an ‘archipelago’.

2. They’re technically part of the UK.

Despite the Isles being 45 km off the British mainland, they are classed as part of Cornwall, where you will find further Areas of Outstanding Natural Beauty and Heritage Coast locations.

3. A handful have citizens.

Five of the islands are inhabited all year round.

Flag of the Isles of Scilly, the Scillonian Cross

4. The isles can be dangerous.

The Scilly Isles have, historically, proven to be very hazardous to passing ships and tankers. Specifically, the first super tanker sunk off the Seven Stones Reef and was responsible for dumping oil up to 120,000 tons in the sea. The wreck of the Torrey Canyon broke multiple records of dubious honor, with it being the biggest and most expensive shipwreck of all time.

There’s more than 530 wrecks known to be off the coast of the Isles.

5. How many isles are there?

In total there are 140 rocky islets as well as 5 inhabited islands.

Their main industry is exporting daffodils to the British mainland. 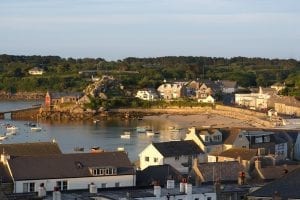 There is nowhere to hire a car, or park one…

The Isles of Scilly is one of the few places you can see puffins in the UK.

9. There are only a handful of ways to reach the archipelago.

It takes 2 hours 45 minutes to get there by ferry and there is only one company that can get you there. But, you can also fly there from Land’s End, Newquay and Exeter if you fancy it. 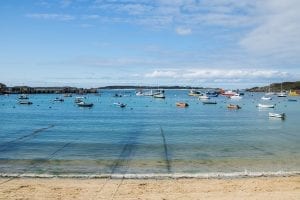 St Mary’s is the only island with roads.

Hugh Town is the largest town with just over 1,000 people. 63% of all people there work in the tourist industry.

Gig racing involves rowing as fast a possible between all the main islands and is thought to originate from the race to retrieve treasure from shipwrecks. 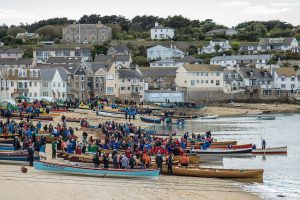 The climate on the Isles is generally pretty mild, however, during the colder months of the year it is likely that you will find winds start to pick up and cause storm conditions.

However, thanks to the sunnier skies above Scilly than you would normally not expect from the rest of the UK, you’ll actually find tropical plants growing on some of the islands.

It’s also a fantastic spot for birdwatchers and wildlife enthusiasts. During October and heading towards the winter, it’s possible you’ll see thousands of birds migrating across the skies.

15. The isles have a place in British legend.

The Scilly Isles are said to be the final resting place of King Arthur, where the legendary hero is buried. 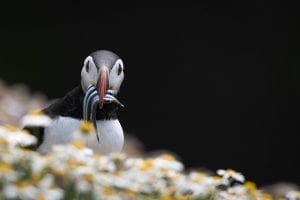 The Scilly Isles remain a popular holiday destination for Brits and those visiting from overseas. Perhaps most famously, it was once the regular holiday haunt of British Prime Minister Harold Wilson.

The islands have an uplifting nickname – the Fortunate Isles – and this may well be to do with the fact that it gets such brilliant weather! 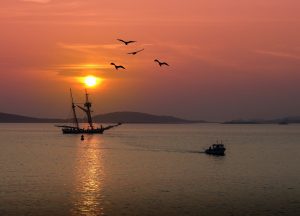 FAQs about The Isles of Scilly

When is the best time of year to visit the Isles of Scilly?

The best time of year to visit Scilly for weather is between the months of May and September.

Can I take my dog to the Isles of Scilly?

Yes! The area is very pet-friendly, and you’re welcome to bring dogs on vacation with you.

Do you need a car for the Isles of Scilly?

No - there’s barely any roads, and there’s no way for you to hire or park vehicles either!

Do you know any fun facts about the Isle of Scilly?  Share them in the comments below!