Komodo dragons have inspired many myths of great proportions. Here are some fun facts about the dragons of Komodo Island.

1. Where is Komodo Island?

Komodo Island is one of the 17,508 islands that make up the Republic of Indonesia.

2. The dragons have local names.

The locals on Komodo Island had given Komodo dragons the name “ora” (meaning land crocodile) long before scientists found out about it.

3. They travel for miles!

It is often a necessity for Komodo dragons to travel between the Indonesian islands and are sometimes observed paddling along for miles away from shore. 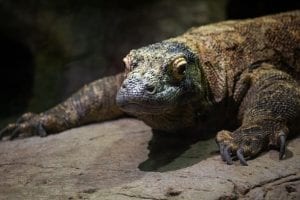 Much like many lizards and snakes, Komodo dragons also have forked tongues that allow them to pick up taste particles that are airborne. The tongue allows the reptile to identify its prey from more than two miles away!

5. They are said to have come from down under.

Although famous for being from the Indonesian Komodo Island, Komodo dragons were originally from Australia. According to fossil records, it is estimated that the reptiles made their move out of Australia around 900,000 years ago, arriving at the island of Flores.

6. They helped to inspire a cinematic classic.

The Komodo dragon was the inspiration for the 1933 film ‘King Kong’.

As Komodo dragons are massive reptiles (weighing as much 200 pounds and measuring up to 8.5 feet long), it is no surprise that they are able to take down large animals such as deer, water buffalo, and wild boars. They usually utilize an ambush strategy. They lie and wait, matching well with the island surroundings, for an animal to pass by. They use their venomous bite before the prey is able to escape.

8. Their skin is fascinating.

A handful of researchers from the University of Texas at Austin were curious and wanted to know more about the armor-plated skin of the Komodo dragons. The primary question they asked was what the world’s largest lizard would need protection from. They discovered that they have bony deposits in their skins of a wide variety of shapes, and it reveals the growth of the reptiles. They also found out that the only thing a Komodo dragon would need protection from is other Komodo dragons.

9. They are actually quite similar to mammals!

These reptiles are able to eat up to 80% of their own body weight in a single sitting. The slow digestion and the large feast mean that they will lounge around in the sun, which helps them with their digestive process. 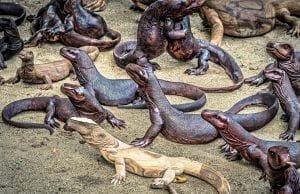 Do I need to worry if I get bitten by a Komodo dragon?

Komodo dragon bites can be pretty gruesome, and they can carry venom in their mouths - but generally, the worst you can expect is an infection. It’s best to go see a doctor!

Yes! Despite the fact that they are often fairly long and heavy, Komodo dragons can easily outrun humans.

Can you keep Komodo dragons as pets?

No - it is illegal to do so, as they are classed as endangered species.

Do you know any interesting facts about the Komodo Dragon? Share them in the comments below!