One of Italy’s most famous landmarks, and the launchpad for a million quirky and funny photos, the Leaning Tower of Pisa is a marvel which has fascinated people for centuries. In fact, it’s likely been around for longer than many people can imagine!

Why does the tower lean? Believe it or not, it’s due to construction anomalies. It’s thought that the ground for the tower was far too soft for its weight and girth, giving it that famous lean. However, it’s thought that this issue was only picked up on midway through adding a second tower on top! Whoops!

2. The lean took time to emerge.

However, the famous lean wasn’t a sudden or overnight event. In fact, it started sinking over a long period of time. After ongoing efforts to try and offset the sinking and lean, it seems that Pisa has just leant into the quirky appeal – pun intended!

Pisa, in fact, has more than one leaning tower. The Church of St Nicola has a bell tower that most certainly leans over to one side – and again, it’s due to the quality of ground that the structure is built into! 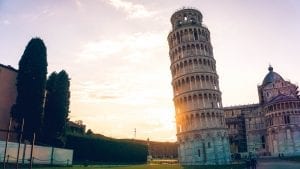 4. The tower is a little shorter than envisaged.

The Leaning Tower of Pisa is around 56m high at tallest, though it was originally built to be around 60m tall.

Construction on the tower crossed at least two centuries, meaning that several generations of Italian construction experts worked on the project. Designs for the Leaning Tower of Pisa first emerged in around 1173, though it wasn’t finished until 1399 – 226 years!

6. It’s been around since ancient times.

The city of Pisa is more historic than the tower, however, as it’s thought to have stood since at least 600 BC. Therefore, there are plenty of other historical artefacts and structures to discover around the area.

7. You can take the stairs!

The Leaning Tower of Pisa boasts around 251 steps leading up to the summit.

8. You’d never be able to hold the tower up.

We’ve all seen photos of people pretending to hold up the Leaning Tower of Pisa – but how much strength would it actually take to prop it up? At around 14,500 tons in weight, you’d probably need more than one strong pair of hands to keep things upright!

The Leaning Tower of Pisa is so old that the legendary Galileo Galilei was baptized here!

In fact, it is said that the Leaning Tower of Pisa was home to one of Galileo’s famous gravity experiments. He is thought to have dropped cannonballs from the tower of different masses to see if they fell at different speeds. From here, Galileo started to form some of his world-changing theories. 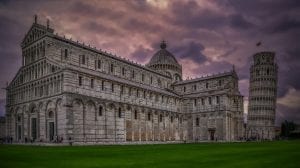 10. The bells have gone quiet.

The tower is home to a series of bells which each ring at a different note. However, believe it or not, the bells of the tower haven’t rung for over 100 years.

One of the reasons for this might be to do with the ancient history of ringing the ‘Bell of the Traitor’, which pealed out whenever a treasonous criminal was executed.

That said, the fact that the tower bells are likely to create some serious shakiness and vibrations in the tower and the ground is another good reason to keep them quiet. The tower’s on a slant already as it is!

The Leaning Tower of Pisa was once earmarked for destruction during the Second World War after Pisa was retrieved from German control. However, thankfully, orders to destroy this particular landmark went unheeded. 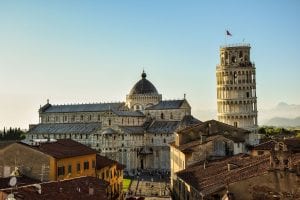 The tower has, believe it or not, leaned in different directions! Additional tower stories added to the structure caused it to slant towards a different point on the compass.

Intriguingly, the Leaning Tower of Pisa may not yet be done leaning altogether. It’s possible that the tower will start leaning even further in another 200 years, meaning that – at least during our lifetime – the tower is likely to stay at its current angle until 2200.

Benito Mussolini, infamous Italian dictator, took it upon himself to try and fix the famous lean in 1934. However, despite immense funds and effort, the tower sunk deeper and deeper into the ground – he made the lean worse! 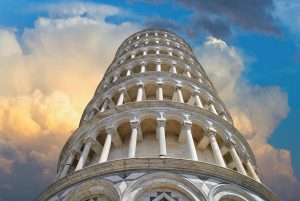 FAQs about The Leaning Tower of Pisa

Why doesn’t the tower fall?

It’s all to do with the center of gravity - which you’ll find carefully pivoted in the base.

Will the tower ever be straightened?

Probably not - even if it can - it’s an amazing landmark! In fact, scientists believe the tower actually corrected itself by 4cm between 2008 and 2018.

Can you climb to the top?

Yes - for a small fee! There are hundreds of steps to help you up.

Do you know any fun facts about the Leaning Tower of Pisa?  Share them in the comments below!