The London Eye might not be one of the longest-standing landmarks of the UK capital, but it’s still one of the most recognisable!  How much do you know about London’s colossal wheel?

Before you book yourself in for a ride, take in a few of the following fun facts about The London Eye to familiarise yourself.  It’s celebrating its 21st anniversary – where has the time gone?

1.  The London Eye is unbelievably popular!

Believe it or not, more people pay to visit the London Eye than any other attraction in the UK.  It welcomes over 3.75 million visitors each year!

That’s more visitors – believe it or not – than the Taj Mahal receives during a 12-month period.  It’s incredibly popular!

2.  The London Eye is seriously big

3.  The London Eye technically opened in the 1990s

While the Eye officially opened to the public in March 2000, it had a maiden voyage on New Year’s Eve, 1999, to mark the new millennium.  Only VIPs had access on the first opening. 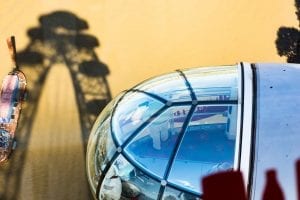 4.  It wasn’t always plain sailing for The London Eye

However, there were teething problems.  There was an initial issue that allowed the wheel to spin without anyone on board – meaning it had to shut down for three months to iron out technical problems.

There are 32 different capsules, all of which have numbers – apart from 13.  The number 13 is thought to be unlucky, which is why the Eye avoids paying heed to it.  One of the capsules is a Royal carriage, designated as such during 2013.

6.  The London Eye carries hundreds of visitors per rotation!

On each spin, the London Eye can carry up to 800 people!  It’s also a fairly steady ride, as the capsules only ever move 10 inches or 26cm a second.  Therefore, you get plenty of time to take in the panorama.  A trip should take around half an hour on average.

7.  The capsules are bigger than you think

You can fit up to 25 people in each capsule, with a weight bearing of 10 tons.

8.  The design inspiration behind The London Eye is surprisingly simple

The design of the Eye is inspired by a traditional bicycle wheel, though it is 200 times the size of what you’d fit to your bike!

9.  The London Eye hasn’t always been a ferris wheel!

The Eye once acted as a moving nightclub, with Red Bull Academy temporarily turning each capsule into separate venues for music and parties in 2013.

It’s also been a dining wheel, with exclusive meals served by the likes of Gordon Ramsay available for a limited time – for tens of thousands of pounds! 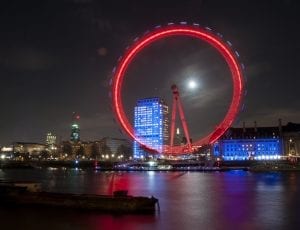 10.  The London Eye is a complex feat of engineering

The Eye is made up of thousands of different parts, some of which source as far afield as Germany and Holland.  Skoda, who make cars in the Czech Republic, also contributed the main hub and spindle.

It’s a huge hit with celebrities, with model Kate Moss thought to have visited the Eye at least 25 times.  Actress Jessica Alba is thought to hold the celebrity record, however, with over 31 trips on the wheel so far.

12.  The London Eye used to Be a record-breaker

It was once the tallest ferris wheel in the world – but in the last 20 years, the likes of the colossal High Roller in Las Vegas, Nevada, have knocked it down a peg or two in the rankings.

FAQs about The London Eye

How long does one trip on the London Eye take?

It's about 30 minutes for you to take a full spin on the London Eye.

When is the best time to ride on the London Eye?

It’s normally pretty busy most times of day, but you’re in for a spectacular treat with quieter rides after the sun goes down.

Can you ride the London Eye at night?

Normally, the London Eye will close around 9pm - meaning it’ll be fairly quiet up to then!

Do you know any fun facts about the London Eye?  Share them in the comments below!

Are you fascinated with Britain? Check out these cool facts about the UK!