Flowing right through the heart of Southeast Asia and six different countries, the Mekong River is one of the world’s greatest waterways. It’s home to a wide range of unique wildlife, cultures and landscapes. Ready to whet your appetite for knowledge? Here’s a few fun facts about The Mekong River:

1. The Mekong is pretty long!

The Mekong River joins numerous countries together and is the twelfth longest river in the world. It flows approximately 4,500 km from its source, from high up in the Tibetan Plateau all the way down to the South China Sea.

The Mekong River is divided into two primary parts: the Upper and the Lower Mekong.

3. The northern half is cruise territory.

There are numerous cruises that sail through the Upper Mekong part of the river, which is full of forests, mountains and other extraordinary landscapes. 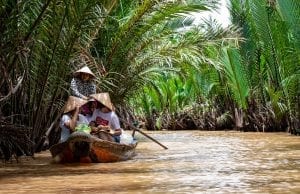 4. Nature spotters will love the southern half.

Lower Mekong, in contrast to its upper counterpart, is filled with active local life and nature.

5. The Mekong has plenty of names.

The Mekong River is arguably known by a wide variety of names. It is called the Lancang Jiang in China, representing the “turbulent river”. On the other hand, it is referred to as Mae Kong or Mae Nam Kong in Laos and Thailand (meaning “The Mother of Waters”). In addition, it is called Cuu Long (or Nine Dragons) in Vietnam.

Just after the Amazon River Basin, the Mekong River is often considered to be the second most diverse area on Earth. There are approximately 20,000 plant species, 850 fish species, 430 mammals, 800 reptiles and 1,200 species of bird. This number is constantly increasing as many previously unknown species are found.

This extraordinary river still retains its amazing blend of culture and history over the past decades.

8. The ebb and flow really varies.

The Mekong River has drastic variations in its flow and volume depending on the time of year. This makes the river hard to navigate through. The Monsoon season between July and October is when 75% of the Mekong’s water flows through.

The deep pools of the Mekong River, which are natural depressions of the riverbed, can be as deep as 90.5 meters. These take place at random intervals along the majority of rivers. 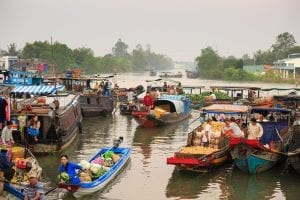 Floating Market on the Mekong River

With approximately 450,000 tons of cargo being transported between China and Thailand ever year, the inland water trade continues to grow along the Mekong.

11. Flooding is a major cost to the area.

The repercussions of floods that occur in the Lower Mekong Basin costs an average of US$60-70 million annually.

FAQs about The Mekong River

What makes the Mekong famous?

The Mekong River is largely famous for the fact that it’s an enormous trade and fishing route!

Why is it the ‘Mother of Waters’?

The Mekong provides water and support to many, many people - hence the ‘Mother of Waters’.

Why is the Mekong Delta so important?

It’s largely thanks to the fact that this is where Vietnam does much of its fishing!

Do you know any fun facts about the Mekong River?  Share them in the comments section below!

This page was last modified on December 11, 2021. Suggest an edit