There is a good chance you may be familiar with the Orient Express. It is after all one of the most famous luxury trains in history. So much so, it is the feature of many books including Agatha Christie’s Murder on the Orient Express and its many films and TV adaptations.

The Orient Express was a long-distance passenger train service created in 1883.
It was developed by the Compagnie Intdrnationale des Wagons-Lits (CIWL).

2. Its journeys have varied in length.

It is best known for its journeys from Paris to Istanbul. However, shorter journeys were also possible such as London to Paris. The train is also known for making trips around European nations that include Vienna, Berlin and Prague.

3. A strike scuppered a TV journey.

In an episode of Michael Palin’s ‘Around The World in Eighty Days’ aired in 1988, Michael traveled on the Orient Express, traveling from London to Victoria to Innsbruck. However, the train was unable to continue on to Venice because of a strike on the Italian railways.

4. One of the classic journeys was actually a rarity to book.

The 6-day journey from Paris to Istanbul and back again could only be selected once a year!

With the assistance of coal stoves, each carriage was kept nice and warm. A small radiator was also included in the carriages.

6. British TV really did make a big thing of the Orient Express.

In TV soap EastEnders, the characters of Den and Angie Watts had their honeymoon on the Orient Express. This was part of one of soap’s most famous storylines ever and it was here the truth about Angie’s illness was revealed.

7. There were multiple services in the 30s.

The 1930s was when the Orient Express was at its peak of popularity. At this time there were three parallel services running under the ‘Express’ group.

8. There were no bathing facilities on board.

The train, although very luxurious in many ways, does not include showers or baths but passengers do have access to washbasins and toilet facilities.

9. Cooling down wasn’t a problem either!

A fan was included in every carriage compartment to help passengers to keep cool.
Passengers were also allowed to open their window should they want to. 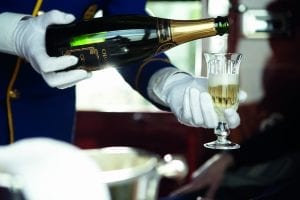 10. There was no internet on board!

In more recent times electrical outlets had been fitted for users of electrical equipment, but note WiFi has never been made available.

11. It’s been featured in plenty of games, songs and stories.

The role-playing game Call of Cthulhu features the train in one of its famous campaigns: ‘Horror on the Orient Express.’

In Hawaii, there was a musical band named ‘Liz Damon’s Orient Express.’

12. It was an extremely popular restauranting experience.

It is said that more than 1.1 million dinners have been served on the Orient Express which comes to almost 4 million courses! 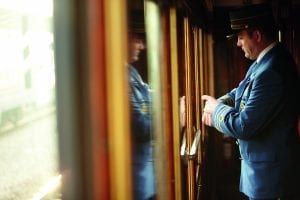 It is interesting to consider that the Orient Express was a great showcase of luxury at an era when traveling was overall much rougher and with more danger than later times.

14. The routes switched up regularly.

The route of the train was to change several times during its years of service.

15. What was the first-ever menu on board?

The first tasty-sounding menu served on board the train consisted of oysters, soup and Italian pasta, a fillet of beef with ‘château’ potatoes, turbot with green sauce, chicken ‘à la chasseur’ and ‘chaud-froid’ of game animals. Sweet options included a buffet of desserts. Sounds yummy! 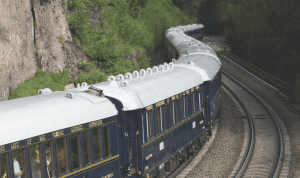 16. The US had its own version for decades.

In the USA, from 1989 to 2008 there was an American Orient Express that operated routes across North America.

17. The Express paused due to the War.

Due to the First World War, in 1914 the Orient Express’ services were suspended. 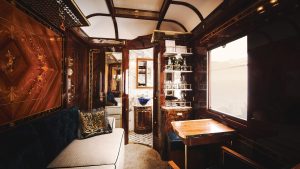 19. It paused for further conflicts, too.

At the start of the Second World War, the service was once again interrupted, this time not resuming action until 1945.

On the 14th December 2009, the Orient Express ceased to operate. The main reason at the time that was provided was due to the increase in high-speed trains and cut-rate airlines. 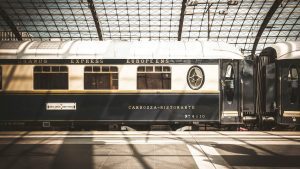 A private venture courtesy of Belmond runs the Venice-Simpton Orient Express train that uses original CIWL carriages from the 1920s and 1930s and continues to run to this day. Its route includes the original Orient route from Paris to Istanbul. Let’s go!

FAQs about The Orient Express

Is there a way to travel on the Orient Express in 2022?

No - the original train is decommissioned - but there are plenty of ‘experiences’ based on the journeys worldwide!

How long were the coach trails on the Orient Express?

Generally, you’d expect there to be at least four coaches, though there were as many as 45 at its longest.

How long did the Orient Express operate for?

The Orient Express was in operation for 121 years, with pauses during World Wars I and II.

Do you know any fun facts about the Orient Express?  Share them in the comments below!