No, not the Johnny Cash song – but the immense natural expanse of volcanic activity out in the Pacific Ocean! It’s fascinating – and devastating – to see just how much natural geological activity occurs out here.

If there are earthquakes or volcanic eruptions in the Americas or in far east Asia, the blame is very likely that of the Ring of Fire. Here are some fun facts about the Ring of Fire you may not be aware of.

The Ring of Fire circles the Pacific and is thought to be around 500km wide. Even more astonishing is the fact that it’s around 40,000km long all the way around!

2.    The Ring of Fire affects many, many countries.

The size of this volcanic belt means many different nations are at risk of natural disaster. This means Japan, Russia, West Coast US, Mexico, Canada, Antarctica, Taiwan, Guatemala, the Philippines, Chile, Papua New Guinea and Peru are all at risk of eruptions here.

3.    The majority of earthquakes rumble up here.

It’s thought that 90% of all the earthquakes on planet Earth take place in the Ring of Fire! It’s also home to most of the world’s active volcanoes. 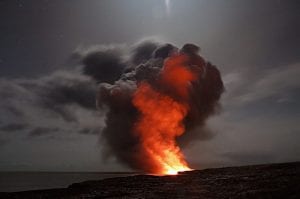 Ferdinand Magellan, who voyaged around the area, named the Pacific Ocean as he found it to be extremely peaceful – the Ring of Fire would reckon otherwise!

5.    The Ring of Fire hosts the world’s deepest trench.

The Mariana Trench is around 11 miles deep, making it the deepest known water geography of its kind. It is, of course, more than at home in a huge expanse like the Ring of Fire.

6.    Is The Ring of Fire a random collaboration of nature?

Many scientists believe that the Ring of Fire is merely a random collection of volcanoes, and that there’s no real connection between them. It’s been proven on multiple occasions that one eruption in the Ring doesn’t necessarily set off another.

7.    The Ring of Fire is the world’s eruption capital.

Given that 75% of the world’s volcanoes have homes in the Ring of Fire, it’s not surprising that most of the planet’s volcanic eruptions occur here. In fact, around 22 out of the 25 most devastating eruptions of the past few thousand years took place here.

8.    Most of the volcanoes here aren’t visible above the water.

That’s right – most of the volcanoes in the Ring of Fire are actually underwater! That doesn’t make them any less deadly, though!

Yes, believe it or not, Japan’s most famous peak is actually an active volcano within the Ring of Fire. While it hasn’t erupted since the 18th century, there’s still a chance it will erupt again. 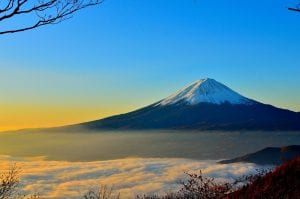 10.  Could The Ring of Fire create a new continent?

Many geologists predict that, over many, many years to come, the volcanic activity in the Ring of Fire could help to create new land masses that take up much of the Pacific. That’s a new continent in the making!

11. The Ring of Fire is home to unique natural phenomena.

The Mariana Trench is only one of two places on Earth where you will find carbon dioxide in liquid form. You’ll find the other occurrence near Taiwan.

Ok, we’re being picky here – but the Ring of Fire is actually a horseshoe. Then again, Horseshoe of Fire really doesn’t have the same ring to it, does it? 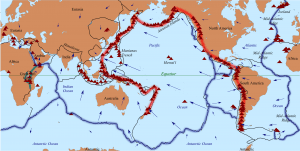 Engineers worldwide are able to harness geothermal expenditure within the Ring of Fire to help generate electricity! It’s seen as an eco-friendly way to produce power without greenhouse emissions.

14. The Ring of Fire is responsible for one of the US’ biggest earthquake zones

The San Andreas Fault, in San Francisco CA, occurs largely as a result of plate tectonics in the Ring of Fire. It really does stretch far and wide!

The Ring is responsible for disasters as large and as far spread as the Indian Ocean tsunami in 2004, the eruption of Krakatoa in 1883, and the San Francisco earthquake in 1906.

FAQs about The Ring of Fire

Is marine life affected by seismic activity along the ring of fire?

Yes, marine life is certainly affected by seismic activity in the zone. Sperm Whales were severely affected during studies, for example. Tracking the whales, some were unable to successfully hunt for up to a year!

What is MODIS used for in the Ring of Fire?

MODIS is a piece of specialized equipment used to detect changes in volcanic activity.

Where is MODIS monitoring the Ring of Fire from?

MODIS equipment is continuously on the move around the planet! It’s housed aboard two roving satellites. The satellites take different trajectories so that the full area is covered.

Do you know any interesting facts about the Ring of Fire? Share them in the comments below!