The Sahara Desert is huge, iconic and breathtaking.  It’s located in North Africa and covers large portions of the continent, but how much do you really know about this sandy region? Let’s shine a light on these 15 fun facts about the Sahara Desert…

1. The Sahara isn’t the biggest desert.

The Sahara is the world’s largest sand desert…although the North and South poles are actually bigger and are also classed as deserts.

It measures 3.6 million square miles…which makes it bigger than the USA!

The desert actually expands and then contracts as the seasons change throughout the year.

Scientists estimate it has grown 10% in the last 100 years. 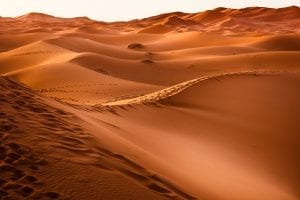 4. Its name is pretty descriptive.

The Sahara gets its name from “sahra”, an Arabic word which means desert.

5. It covers many different territories.

6. A minority of the Sahara is sand.

Only 25% of the desert is covered with sandy dunes.

7. There are peaks to scale here!

There are a number of mountain ranges if you know where to look. Incredibly, snow has been seen on their peaks from time to time!

8. There’s an old volcano in the desert.

The highest point is Mount Koussi in Chad. It’s an extinct volcano.

9. The sand dunes are massive, too. 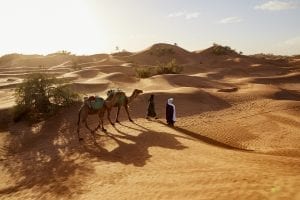 There are an estimated 2.5 million people that call Sahara their home. Most of these people have Arabic or Berber roots and live in settlements located near sources of water. Some also have a nomadic lifestyle.

A vital part of Ancient Africa’s economy was the trade routes of the Sahara. Gold, copper and salt were some of the goods that were transported using camel caravans. It’s recorded that there were up to 12,000 camel caravans traveling between Egypt and Sudan at one time.

Being the hottest desert in the world, the Sahara has one of the harshest climates. The hottest temperature ever recorded in the area was 136.4°F. Despite popular beliefs surround the Sahara Desert and its constant hot climate, the temperatures drop significantly during the night due to low humidity. 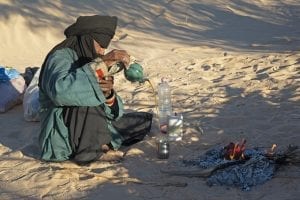 The desert is more than just sand, as it consists of rocky plateaus, sand dunes, dry valleys and salt flats. There are a total of 20 lakes in the desert, and the only freshwater lake in Sahara is Lake Chad.

The Sahara Desert has changed significantly over the years. Although hard to believe, the desert was full of greenery and was home to a variety of animals and plants. However, the Sahara we know now occurred due to the slow change in the tilt of the Earth. It is believed that the Sahara will go back to its previous state sometime in the future.

Stargazing, quad biking, trekking and sand surfing are some of the many activities that you can do in the Sahara. 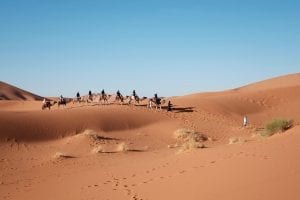 FAQs about The Sahara Desert

How deep is the Sahara Desert?

The sand in the Sahara is said to be around 141 feet or 43 meters deep!

Which country is the ‘most’ Sahara?

Mali is ‘more Sahara’ than any of the others the desert extends into. Believe it or not, the sand covers up to 65% of its land.

Where did the sand in the Sahara Desert come from?

It’s thought that the Sahara’s sand likely came from sandstone deposits that weathered down during the Cretaceous period.

Do you know any fun facts about the Sahara Desert?  Share them in the comments below!

This page was last modified on October 13, 2021. Suggest an edit