Beautiful and bursting with wonderful wildlife, the Serengeti is one of the world’s most important natural reserves. It’s home to thousands of species of flora and fauna, out in Tanzania in North Africa. Here are some fun facts about the Serengeti that may just turn your head.

1. What’s the climate in the Serengeti?

Temperatures during the rainy season seldom fall below 98 degrees F, and 55 degrees F in the dry season. Hot hot hot!

2. What does the word Serengeti mean?

3. The Serengeti is ripe with wildlife!

The Serengeti plays host to wild animals such as zebras, elephants, wildebeest, gazelles, and rhinos. 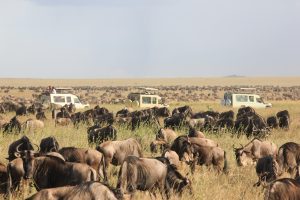 Unesco recognised the Serengeti to become a world heritage site in 1981 – meaning it’s actively protected by many people.

It is estimated from radiocarbon dating that the Serengeti is between 3,700 and 1,550 years old. Indications are that the area has been home to grazing animals for approximately 4,000 years!

The Serengeti is, of course, the main stage of the action taking place in Disney’s The Lion King. However, it’s unlikely you’ll find singing lions and hornbills in the wild!

7. Human ancestors roamed the Serengeti many, many years ago.

Studies have revealed that ancestors of humans lived in the Serengeti area millions of years ago. Known as ‘Australopithecus’, research continues into how habitats developed and how climatic events have changed the landscape.

Today the Maasai people live on the frontiers of the Serengeti National Park. Many are farmers who cultivate land and breed cattle.

9. It’s a prime spot for predators!

There are several predators in the Serengeti. Humans are amongst them, often poaching animals. Lions and hyenas are two of the main predators in the area – something The Lion King got right! They largely feast on zebras and wildebeest (if they can catch them!). 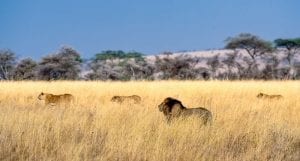 Part of the Serengeti is semi-desert and part grassland. Climatic changes and those living on the land affect the topsoil quality and – of course – the variety of wonderful plant life growing here!

There are two annual phases to the migratory pattern of the Serengeti. The first is during the rainy period from early January to March. This is an especially good time for calving.

The second phase is from late May to July, when animals move northwest, crossing rivers – this is an especially good time for crocodiles to capture their prey, for example!

The Serengeti area became officially protected in 1974 by the Tanzanian Wildlife Conservation Act and, in 2009, the Wildlife Crime Act.

The governments of Kenya and Tanzania share responsibility for maintaining the Serengeti. The Serengeti is subdivided into 28 wards. 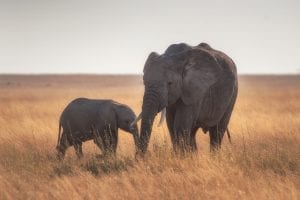 13. The wildebeest are organized!

Records prove that wild Wildebeest are changing their habits due to pressure on their historical territory. Excessive intrusion means plants cannot grow quickly enough to sustain in the way they once did!

FAQs about The Serengeti

Are there any endangered species in the Serengeti?

Yes - animals in the area such as cheetahs, wild dogs, elephants and black rhinos are now sadly resident on the endangered list. It’s a key reason why the area is so fiercely protected.

TANAPA is the Tanzania National Park management and administrative body. It’s responsible for foot, motor and aerial patrols of the Serengeti. This includes monitoring Ol Doinyo Lengai, the most recently active volcano.

What is the Great Migration?

The Great Migration is a name given to a huge movement of animals in and out of the Serengeti. For example, there are more than 500,000 zebras - and more than 1.7 million wildebeest - that travel from south to north across the region. That’s a lot of walking - and there’s probably safety in numbers!

Do you know any interesting facts about the Serengeti? Share them in the comments below!