The Suez Canal is one of the world’s most impressive industrial achievements! This man-made waterway was built to connect the Mediterranean and the Red Sea, and creates the shortest naval route to Asia from Europe.

With the recent Suez blockage by the grounding of the cargo ship ‘Ever Given’, once more we are reminded of the importance of the world’s most heavily used shipping lane. And while you may already know some bits of information about this massive construction, here are 14 fun facts about the Suez Canal that you might find surprising…

1.   The modern Suez Canal is young

Several manmade waterways once snaked their way across Egypt, and the modern Suez Canal is only the most recent one.

2.   However, its predecessors are really ancient

According to ancient sources, the Egyptian Pharaoh Senusret III built an early canal linking the Red Sea and the Nile River around 1850 B.C.

The Pharaoh Necho II and the Persian conqueror Darius both began working on a similar project but then abandoned the work.

3.   The ancient canal was fit for pharaohs

Allegedly, the canal that the Pharaoh Necho II and the Persian conqueror Darius worked on was finished in the 3rd century B.C., and many rulers including Cleopatra may have travelled on it. This ancient canal found its way through the desert to the Nile, which was then used to access the Mediterranean, rather than the straight link offered by the modern Suez Canal. 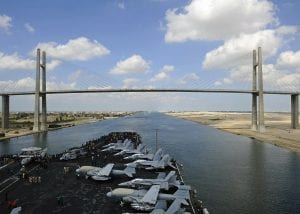 Napoleon Bonaparte, after conquering Egypt in 1798, sent a team of surveyors to explore the possibility of cutting the Isthmus of Suez and building a canal from the Red Sea to the Mediterranean. But due to the surveyors’ faulty calculations concluding that the Red Sea was at least 30 feet higher than the Mediterranean, his attempt to create the canal failed.

5.   The British government opposed the Building of the Suez Canal

Ferdinand de Lesseps, a former diplomat, agreed with the Egyptian viceroy to form the Suez Canal Company. Because the project was also sustained by the French Emperor Napoleon III, the British government saw it as a premeditated act of disobedience towards their global shipping power, which was far greater than any other at that time.

The British Government bought a staggering 44% stake in the waterway after the cash-strapped Egyptian government auctioned off its shares in 1875.

Beginning in late-1861, the early portions of the canal were dug by tens of thousands of peasants using picks and shovels. Progress was painfully slow, and the project hit a problem after Egyptian ruler Ismail Pasha suddenly banned the use of forced labor in 1863.

Lesseps and the Suez Canal Company changed their strategy and began using new technology, which gave the project the boost it needed, and the company went on to make rapid progress during the last two years of construction.

In fact, three-quarters of the 75 million cubic meters of sand shifted during the building of the main canal, was controlled by heavy machinery.

9.   The Statue of Liberty was envisioned for the Suez Canal

In 1869, near the Canal’s completion, the French sculptor Frédéric-Auguste Bartholdi tried to persuade Ferdinand de Lesseps and the Egyptian government to let him build a sculpture called “Egypt Bringing Light to Asia” at its Mediterranean entrance.

The project never materialized, but Bartholdi didn’t give up, and in 1886 he finally unveiled a completed version in New York Harbor, the monument known today as the Statue of Liberty. 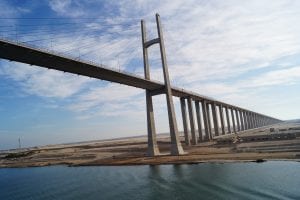 10. Ships have been stranded in the canal before…

In June 1967, during the Six-Day War between Egypt and Israel, The Egyptian government shut down the Suez Canal and blocked it on either side with mines and destroyed ships. Fifteen ships were tied at the canal’s midpoint at the time of the closure. They remain stranded in the waterway for eight years, earning the nickname the “Yellow Fleet” for the desert sands that covered their decks.

In August 2014, Egypt’s Suez Canal Authority announced a grand plan to deepen the canal and create a new 22-mile lane branching off the main channel. The development opened in 2015, enabling larger ships to use the newly deepened main waterway.

12. But that wasn’t enough to stop another major blockage

On the 23rd March, 2021, an enormous 400m-long container ship called the Ever Given was wedged in the Suez Canal. The blockage caused much concern and frustration for the global shipping industry. Thankfully, after 6 days and 7 hours the ship was finally freed from the shoreline. 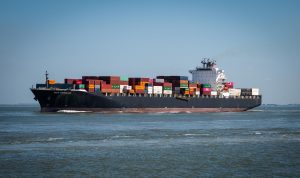 Before the pandemic, the trade conducted across the Suez Canal contributed to 2% of Egypt’s GDP, according to Moody’s.

14. It’s important for global trade, too

Around one million barrels of oil and roughly 8% of liquefied natural gas pass through the canal each day, which represents about 12% of the global trade.  The grounding and blockage of the Ever Given is estimated to have cost an eye watering $6.7 million a minute in lost trade!

FAQs about The Suez Canal

Is the Suez Canal blocked?

We can’t speak for right this second - but back in March 2021, the Suez was infamously blocked by an enormous container vessel called the Ever Given. It’s since been moved on!.

Who actually owns the Suez Canal?

The Suez Canal falls under the ownership of Egypt, who has had control of the passage since 1962.

What is the Suez Canal Authority?

The Suez Canal Authority, or SCA, is set up to maintain the canal - it’s actually a successor to the original Suez Canal Company, created in advent of the crisis in the 1950s.

Do you know any fun facts about the Suez Canal? Share them in the comments below!