The Taj Mahal is, without a doubt, one of the world’s most majestic pieces of architecture.  Found in the Indian city of Agra, it courts more than a million visitors each year purely for its spectacular visuals.  However, it is a mausoleum with plenty of interesting facts about it.

To explore the love story behind this majestic monument, here are 26 fun facts about the Taj Mahal, India’s most popular tourist attraction…

1. It’s the jewel of Islamic art

The Taj Mahal is the jewel of Islamic art in a nation that is predominantly Hindu. It unites architecture from all the places of the Empire including Islamic, Persian, Ottoman Turkish, and Indian architectural styles.

2. The entire complex is a testament to the cultural sophistication of the Mughal Empire

The complex consists of the famous white mausoleum, a reflecting pool, and lush gardens, among other buildings.

Shah Jahan was the 5th Mughal emperor who ruled from 1628 until 1658. Under his supremacy, the Mughal Empire reached its cultural peak and, and its Golden Age of architecture. 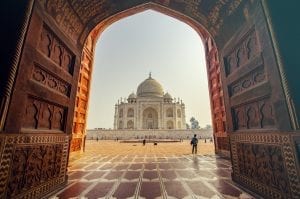 4. Building the Taj Mahal was not an overnight job

It’s believed to have taken 17 to 20 years to plan and build the Taj Mahal.

5. It took an army to build it

The fact is that 22,000 experts were working on the project! Every detail was meticulously executed. Three acres of land were excavated and levelled.

6. Actually, it took more than an army

Over 1,000 elephants were used to transport building materials, which were then carried by oxen up a nine-mile earth ramp created for the project.

7. The scaffolding was successfully dismantled overnight

According to legend, Shah effectively had the scaffolding disassembled overnight by informing local peasants that they could keep any of the bricks they took from it.

8. Its full of design

Thousands of painters, embroidery artists, and stonecutters were included in the design of the Taj Mahal. All of this attention to detail truly paid off!

9. The building is intended as a mausoleum

This means that there is an ancient tomb underneath the palace dating back to the 17th century. It’s said that the construction finished around the early 1650s. 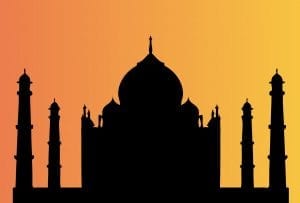 10. A love story between an emperor and his wife

The main grave at the Taj Mahal belongs to Mumtaz Mahal, the third wife of Indian Emperor Shah Jahan. She passed away at 39 years old, and Jahan wanted to honor her memory with an extravagant mausoleum.

11. The most famous part of the building

The ‘onion dome’ of the Taj Mahal is probably the most famous part of the building. It’s huge, around 115 feet in height! In fact, the full height of the Taj Mahal itself is around 561 feet. It’s truly colossal and breath-taking!

The Taj Mahal is home to gardens, mosque facilities, outdoor reflection pools, and even further graves and tombs.

13. The name ‘Taj Mahal’ translates to ‘Crown of Palaces’

But that’s not all! It’s clearly named after Mumtaz Mahal, too. 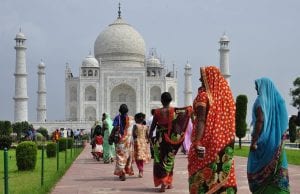 Given its importance, India’s government is fiercely protective of the Taj Mahal. During the Second World War, for example, Indian forces worked to create a giant cover for the building, which was used to protect it from air attacks.  The disguise worked perfectly!

It demands a lot of maintenance! For example, motorised transport is forbidden within 500 meters, or 1640 feet, of the building – the pollution could damage its famous sheen.

There’s a story that Shah Jahan had plans to put a second Taj Mahal into motion. It would be his own mausoleum – a black palace to contrast with Mahal’s white.

17. It was quite expensive

There’s no doubt the project was expensive, given the manpower needed to make the Taj Mahal come to life. By the time it was finished in 1653, the estimated cost was 32 million rupees. That converts to about 70 billion rupees ($916 million) in 2020. 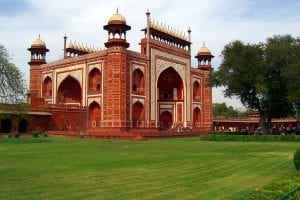 18. Luxurious materials were brought in from across Asia and India

Vast quantities of white marble were brought in from Makrana, as well as 28 selections of precious and semi-precious stones. Jade was brought from China, turquoise from Tibet, sapphire from Sri Lanka, and lapis lazuli from Afghanistan.

Another example of opulence can be found on the dome. Originally, the final topping of the mausoleum’s dome was made from gold. Since then it’s been replaced with bronze.

It’s a perfectly symmetrical complex, organized on bilateral symmetry that runs along a central axis.

21. The mausoleum is the central feature of the complex

The mausoleum is bordered by two red sandstone structures — the mosque and the guest house. 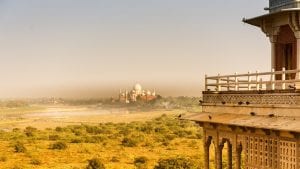 22. The importance of white

The mausoleum is the only all-white building in the complex. The whiter the building, the more important that particular structure was.

a 4,000 square mile area The Taj Trapezium Zone (TTZ) was set up. The area has strict emissions standards and a 1996 Supreme Court’s decision banned the use of coal in industries located within the TTZ.

The popularity of the Taj Mahal means that the surrounding neighborhood has turned into a tourist trap. But, rest assured, this majestic mausoleum is still worth the effort! 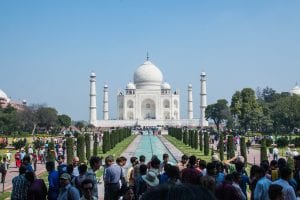 25. Don’t wait too long to visit the Taj Mahal

A worrisome fact is that the Taj Mahal is built on a river basin and there are reports of structural cracks and foundation problems.

FAQs about The Taj Mahal

What exactly is the Taj Mahal?

It’s technically a colossal mausoleum - built in memory, rather than as a grave site.

Is the Taj Mahal a Wonder of The World?

It’s not one of the original Seven Wonders of The World, but the Taj Mahal certainly makes the ‘New’ list.

Why is the Taj Mahal a huge tourist attraction?

The Taj Mahal is so popular with tourists mainly thanks to its stunning architecture. However, it’s also seen as a massive symbol of love and commitment!

Do you know any interesting facts about the Taj Mahal?  Share them in the comments below!