The Terracotta Army is a world-renowned site, usually busy with visitors from all around the world. Did you know that the Terracotta Army warriors wear different uniforms and that each warrior has unique facial features and hairstyles?

Let’s do a bit of excavation ourselves with these fun facts about the Terracotta Army…,

The first ruler of China, emperor Qin Shi Huang spent much of his life searching for immortality. He had a tomb complex built for himself that covered 20 square miles and ordered the construction of the terracotta army as soon as he rose to the throne in 246 BC.

Most of his resolutions were made by officials as he was only 13.

More than 700,000 workers are thought to have been forced to take part in the construction, including soldiers, craftsmen, and peasants. 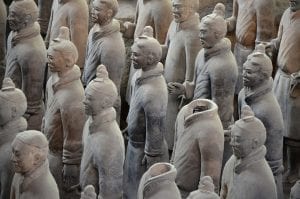 Four pits were planned to be built.

At the time when the terracotta army was partially dug, three of the pits contained terracotta warriors and one pit was empty. It’s believed that it wasn’t finished because of Qin’s sudden death in his 50s. His tomb remains un-excavated.

5. There are thousands of clay sentries.

There was a terracotta army of over 8,000 clay soldiers accompanying the emperor Qin in the afterlife.

6. We’re not done discovering them all.

The excavation and renovation of the Terracotta Army is still on-going, with many more terracotta figures still waiting to be excavated.

More than 8,000 soldiers, 130 chariots, and 670 horses have been uncovered since the discovery of the terracotta army.

7. It’s not just soldiers, either!

Terracotta musicians, acrobats, concubines and birds have been discovered in recent pits. It is believed that Qin wanted the same impressive amenities and treatment for his afterlife.

8. They were discovered by accident!

Local farmers in Xiyang Village, while digging a well, accidentally discovered the Terracotta Army in March 1974.

When they found broken pottery pieces they assumed that they found an abandoned kiln.

The local farmers excavated several broken life-sized terracotta warriors and realized that there might be ancient relics and reported to the government.

9. They were eventually professionally unearthed.

The Shaanxi Provincial Archaeological Team excavated the Terracotta Army and it resurfaced to the public. 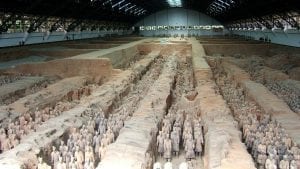 The find was even celebrated as the Eighth Wonder of the World by the former French Prime Minister Chirac in 1978.

11. UNESCO recognizes the Army as being extremely important.

In 1987 the archaeological site was marked as a UNESCO world heritage site.

12. They’ve been around for millennia. 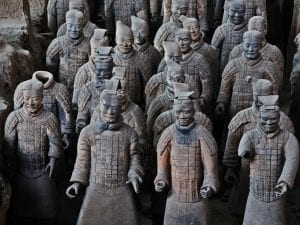 13. The building took place over decades.

According to Sima Qian’s historical records, it took about 40 years to build this terracotta army. Due to Qin Shi Huang’s sudden death, the terracotta army was buried in his mausoleum.

14. They indicate strong beliefs regarding death.

In ancient times, people believed in the afterlife, and human sacrifices were considered normal.

Around 550 BC evidence of human sacrifice was found at the tomb of Qin’s King before Qin Shi Huang.

Even though Qin was pursuing immortality during his rule, he was still preparing for the afterlife, with his army to guard his tomb, announcing that his rule would continue even after his death. 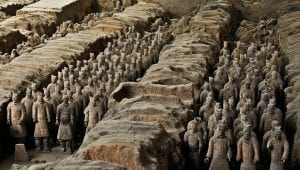 16. Could the Army have helped preserve human life?

The Terracotta Army might have served as a substitute for the actual human sacrifices and a way to display the glory of Qin’s empire at the same time.

The potters and craftsmen who made the terracotta army were from the lower class of the Qin Empire.

To control the quality of the clay warriors and manage the project’s craftsmen each part of the pottery was signed and noted.

18. There are plenty of inscriptions.

The archaeologists found inscriptions or stamps unearthed the terracotta figures and horses. Usually, 2 to 11 words were used, and besides the warrior’s ID, the craftsman’s name was also on the pottery. 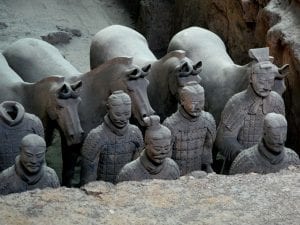 19. They are truly massive, comparatively!

The terracotta warriors and horses are about 10 m2 taller than the average height of the people in the same period.

20. They all vary in size and shape, generally.

The shape of the terracotta army is quite different and no two figures are exactly alike.

21. What does a single sentry weigh?

A single terracotta warrior has an average weight of about 180 kg, while the heaviest is the terracotta horse, at more than 300 kg.

The heaviest terracotta warrior (of the kneeling and shooting terracotta army) is about 250 kg and the lightest is about 100 kg. 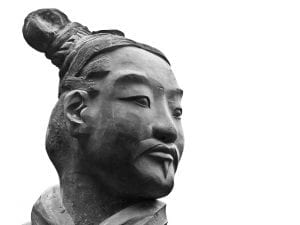 The paint found on the terracotta army is being preserved by scientists using various techniques.

Every year more than 1 million tourists worldwide visit the Qin’s Mausoleum and the Terracotta Army Museum. 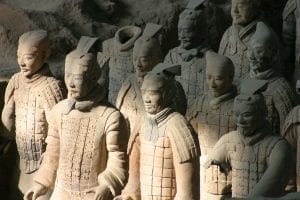 FAQs about the Terracotta Army

Was the Terracotta Army broken up?

It’s thought that original weapons made alongside the terracotta army may have been broken off!

Was the Terracotta Army build by slaves?

Yes, the terracotta army was made partly by slaves, though also by prisoners and servants.

Why was the Terracotta Army built?

The army was supposedly built to help establish China is a triumphant superpower.

Do you have any interesting facts about the Terracotta Army ? Share them in the comments below!

This page was last modified on September 30, 2021. Suggest an edit