The Thames is a seriously large river – there’s a reason why it is such a landmark in the city of London! However, as with any river, it’s always going to be at risk of causing damage unless kept under careful control. That is why the Thames Barrier exists.

But what exactly is the Thames Barrier, and how does it work to keep people safe? How much do you already know about this Barrier? Let’s take a look at a few fun facts about the Thames Barrier which may just surprise you – even if you are local to the area!

The Thames Barrier is a moveable flood defense. In fact, the UK government advises that it is one of the biggest of its kind across the whole planet.

2. The government controls the Barrier.

The Barrier is operated through a wing of the British government known as the Environment Agency.

While the Thames Barrier is easily the best-known flood defense in London, it’s not the only Barrier in place to help support the river and local people.

The Barrier is in place to ensure that some of the biggest attractions, resources and communities surrounding the river Thames don’t face complete waterlogging.

In fact, a study showed that, if the sea continued to rise into the Thames, areas such as Whitechapel would be completely flooded. 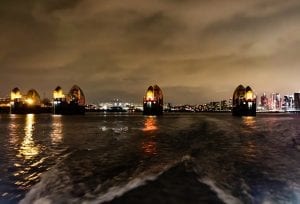 Without the Barrier, services such as the O2 Arena and Tower Bridge would be flooded, too.

5. It’s younger than you think.

The Barrier is actually a fairly modern invention. It’s been a part of the London area since 1982.

The Barrier is not a single unit. There are ten separate gates which make up the whole of the Thames Barrier.

The total reach of the gates, made of steel, across the River Thames, is said to be around 520m.

8. Four out of the ten have central positions.

There are four central gates in this system. These account for around 62m in length all on their own.

They are also pretty heavy! It’s thought that each of the main barrier gates – the main four, in any case – are over 3,000 tons in weight – each! 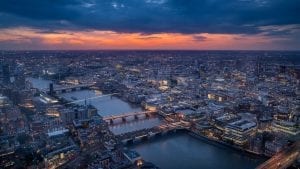 Closing the Barrier takes some serious time out of operators’ schedules. This is because it can take up to an hour and a half to close in full!

It’s thought that the Barrier has been used more in recent years than it has over its whole lifespan.

However, it was fully closed for a short time in 2012. This means that there have been periods of low or quiet tide where there hasn’t been a need for the Barrier at all.

12. The Thames Barrier is built to last.

Anyone worried about the integrity of the Barrier shouldn’t need to worry too much. They are built with thick concrete and steel construction.

There is a risk that boats and vessels may connect with the Barrier. However, as as demonstrated in the late 90s, it’s more likely that a ship will sink than the Barrier receive any kind of lasting damage! 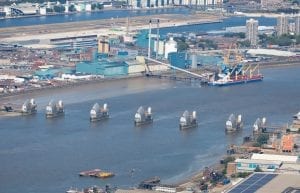 It’s possible to pass through the Thames Barrier, though you’re going to need to radio ahead to ask for permission. There is a control system in place where up to 5,000 vessels pass through the gates each year.

14. Will it weather decades to come?

It’s possible that the Barrier may stay in place for up to an extra 50 years.

15. It took long enough to launch!

London’s decision to set up a barrier in the 1980s arises after decades of flooding issues. It’s thought that a flood in Putney in 1920 was around four feet deep. 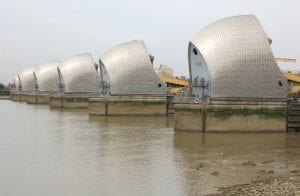 16. It only has a few positions to slot into.

There are three main positions in which the Barrier will observe at any one time.

One position the Barrier sits in, of course, is ‘open’. This means that boats can freely pass through.

However, it will often be closed. This means that water is stopped from heading further up the stream and into the city itself. There is also an underspill position which will allow for some water to pass through.

17. London really does rely on it!

The Barrier itself is thought to protect a huge expanse of land across London. It’s said to help protect up to 48 square miles of the capital.

Building of the structure took up to eight years to complete, meaning that planning started in the 1970s, and construction completed in the 1980s. 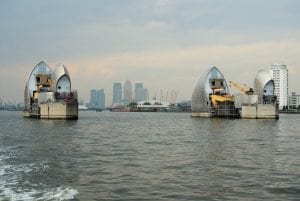 It’s thought that only the Oosterschelderkering Barrier, based in the Netherlands, is larger than the Thames Barrier in terms of flood defenses.

20. It was seriously expensive!

Taking inflation into account, it would cost around £1.6 billion to set up and install the Thames Barrier in 2020. The actual cost at the time of building and planning came to around £535 million.

There are up to 80 different members of staff who take care of the Thames Barrier.

The Thames Barrier and its team rely on weather forecasting and automated sea level monitoring to help decide when it should open and close.

It’s thought to cost around £6 million to run each year, staff costs included.

It’s thought that while there is the possibility to make the Barrier’s walls taller, doing so would effectively block the view of the Thames from the rest of the city.

The Barrier is, on the whole, around 2m tall all around.

The Barrier’s walls are actually hollow and circular, which allows them to collect and dispense of water along the way. 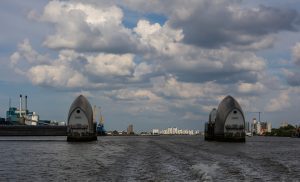 It’s thought that the straightness of the nearby banks at the time of construction were pivotal in choosing the location.

Believe it or not, the Barrier is based on gas cooker taps, at least in design principle. 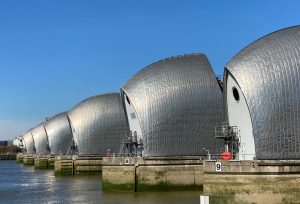 FAQs about The Thames Barrier

Could the Thames Barrier be destroyed?

Potentially, but it’s unlikely. The Barrier is extremely well-protected in the event of a terrorist attack.

Does London ever flood?

Take a look at history! London has flooded many, many times. By the 70s, people decided they’d had enough!

Is London at risk of sinking underwater?

There’s the potential - a study in 2021 showed that parts of London could submerge by the end of the decade - were the Thames to burst.

Do you know any fun facts about the Thames Barrier? Share them in the comments below!