Tobacco is the generic name of several plants belonging to the genus Nicotiana and the Solanaceae family.  It is the collective term esp. for Nicotiana tabacum and to a limited extent, Aztec Tobacco (N. Rustica). The plant is grown for its leaves, which are dried and fermented before being put in tobacco products.

It contains nicotine – an addictive substance – which is why people who use tobacco find it challenging to quit. Numerous other species in the genus Nicotiana are grown as ornamentals. Here we have gathered some interesting facts about tobacco…

1. We’ve been growing tobacco for millennia.

It is considered that tobacco growing began in the Americas about 6,000 B.C.
There are many kinds of tobacco including Bright leaf, Burley, Cavendish, Maryland, Turkish tobacco, Perique, Oriental, Shade, White burley, and Wild tobacco.

2. It’s been used for all kinds of practises.

American Indians began to use tobacco in many different ways as early as 1 B.C. mainly for religious and medicinal practices. Tobacco was believed to cure all and was used to dress wounds and as a painkiller.

3. Columbus is partly responsible for its rise in popularity.

Christopher Columbus was offered dried tobacco leaves as a gift from the American Indians in 1492. Afterward, sailors began to bring tobacco to Europe, and the plant was growing well all over Europe. 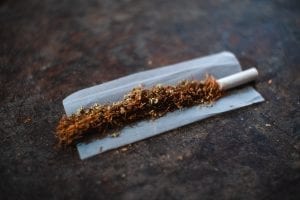 The seed of a tobacco plant is tiny. A 1-ounce sample contains about 300,000 seeds.
Cultivated tobacco requires a frost-free period of 100 to 130 days from the date of transplanting to maturity in the field.

5. Some tobacco is more potent than others.

Aztec tobacco which is grown to some extent in India, Vietnam, and certain Transcaucasian countries, matures more quickly and is more potent than cultivated tobacco.

6. There are different ways to derive tobacco.

Tobacco can be harvested 70 to 130 days after transplanting by two methods. One method is to cut the entire plant and the stalk split or speared and hung on a tobacco stick or lath. The other method is to remove the leaves at intervals as they mature.

7. What is tobacco curing?

Tobacco has to be cured after harvesting. Generally, they are cured by air, fire, and flue.
A fourth method, sun curing, is practised with aromatic types and to a limited extent with air-cured types.

Curing has to be done in four steps: wilting, yellowing, coloring, and drying. These involve physical and chemical changes in the leaf and are regulated to develop the desired properties. After curing, the leaf is piled in bulk to condition for a while before it is ready for sale.

Except during humid periods, the leaf must be conditioned in moistening cellars or humidified rooms before it can be handled without breakage.

9. We’ve known about pure nicotine for around 200 years.

In 1826, the pure form of nicotine was finally discovered. 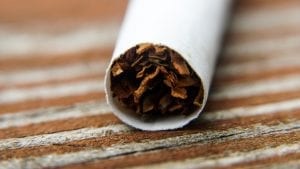 10. Smoking was a wartime habit.

Tobacco is consumed in many forms and through several different methods. Some examples are beedi, cigars, cigarettes, snuff, hookah, pipe, tobacco water, etc.

The tobacco industry started to market heavily in areas outside the U.S. during the ’80s and ’90s. 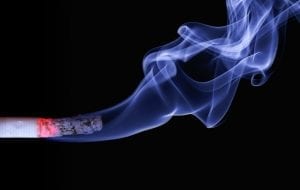 Health warnings on cigarette packs began to pop up from 1966.

14. There’s not just tobacco and nicotine in your cigarette.

Cigarettes are made up of thousands of chemicals, including at least 70 known to cause cancer.

Many of these substances cause cancer and some can cause heart disease, lung disease, or other serious health problems.

15. In fact, there’s more than one tobacco derivative in your cigarette.

When used in the form of cigarettes, it contains two main tobacco leaf varieties, fillers including stems and other waste products, flavorings and additives. 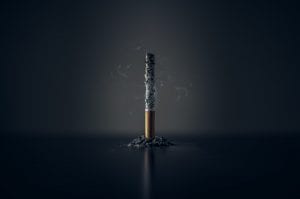 Studies have found that smoking roll-ups result in an increased risk of cancer of the mouth, esophagus, pharynx, and larynx compared to smokers of manufactured cigarettes.

More than 8 million people die each year because of tobacco and 7 million of those deaths are the result of direct tobacco use while around 1.2 million are the result of non-smokers being exposed to second-hand smoke. 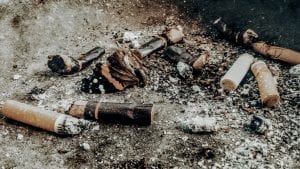 19. Quitting smoking is tough, but worth it.

When a person tries to quit, he or she may have withdrawal symptoms, including irritability, problems paying attention, trouble sleeping, increased appetite, and powerful cravings for tobacco.

20. Smoking is an ongoing struggle.

The World Health Organization is trying to fight the tobacco epidemic. ‘World No Tobacco Day‘ is celebrated around the world every year on May 31. 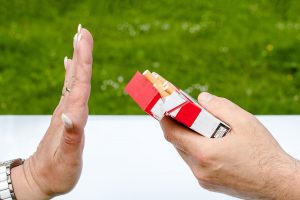 If you’re trying to quit smoking and need some advice, check out the American Lung Association’s advice.

Is smoking an occasional cigarette safe to do?

Health studies and research show that even smoking two or three cigarettes a day could shorten your life - so take care!

Does smoking tobacco have any positive effects?

Many people smoke tobacco to relieve stress - however, the negatives far outweigh the positives.

What is considered heavy smoking?

Heavy smoking generally means you light up to smoke at least 19-20 times a day.

Do you know any interesting facts about tobacco?  Share them in the comments below!