Tornadoes, twisters – you name them – are huge spirals of dangerous wind that often cause a lot of damage and can even prove fatal.  Many people love following tornadoes, as from a distance they can look amazing!  However, it’s probably best to try and keep a strong tornado at more than just arm’s length.

Here are some truly interesting facts about tornadoes you may not have heard before!

1. They are quick but deadly.

Tornadoes don’t last long but can be devastating. In fact, it’s rare you’ll see a tornado spin for longer than a couple of hours.

2. You never know when tornadoes are due.

There’s no real way of predicting a tornado through other weather. You will often feel rain or even see lightning alongside – but they are rarely connected to this spiralling columns of wind.

3. Vortexes are only slightly similar to tornadoes.

What’s the difference between a tornado and a vortex?   If a vortex is tall enough to reach the clouds, as well as to touch the ground, it becomes a tornado. 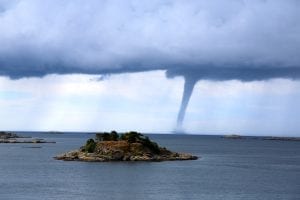 4. There is some timing to tornado attacks.

Believe it or not, tornadoes often strike at specific times. You could experience one at any time of day, but you’ll generally spot them after 3pm, heading towards early evening.  Waking up to a tornado in the morning, therefore, is pretty unlikely.

5. They are actually see-through.

Tornadoes are generally transparent. How else can you see large gusts of wind?  It’s what a tornado picks up, such as dust and dirt, which makes it visible.

Ever heard that tornadoes can’t travel across water? It’s a myth.  In fact, once a tornado finds its way across a lake, for example, it turns into a waterspout.

7. A tornado is not worth tangling with.

Tornadoes may not last long, but they can cause miles worth of damage. You might see the effects and destruction caused by a tornado stretching up to 50 miles wide.

8. There’s a strong probability your tornado detector is faulty.

People have been trying to predict tornadoes for decades. However, tornado forecasting is only correct 30% of the time.  Still, it’s better to be safe than to be sorry!

9. They tend to group together.

Tornadoes have a habit of appearing in clutches. The worst ‘outbreak’ of its kind occurred in 1974, over the course of two days in early April.  Homes and businesses across 13 different states in the US found themselves at the mercy of 147 different high-power tornadoes. 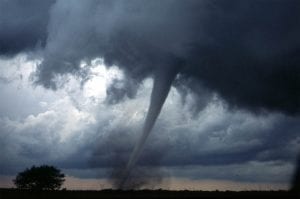 Tornadoes, generally, seem to spin in the same direction, known as cyclonic.

11. Tornadoes and other winds are easy to tell apart.

It’s easy to spot a tornado in comparison to other devastating winds. A tornado is the fastest of them all – and it’s likely to cover a lot of ground, very quickly.

12. Hundreds can die from a single tornado strike.

In March 1925, three US states saw the biggest fatalities from a tornado on record. Tragically, 695 people lost their lives in one single event. 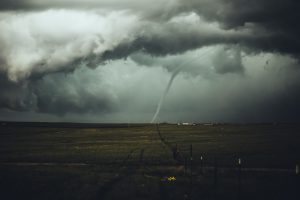 How are tornadoes actually formed? Science states that they are born out of thunderstorms.  They actually build up as vertical cloud columns, thick in water vapour and dust that they pick up along the way.

You’ll most commonly find tornadoes in what is known as ‘Tornado Alley’, a block of US states travelling from Iowa to Texas.

15. Want to escape these high winds?

The only place where you won’t ever find a tornado is in Antarctica! 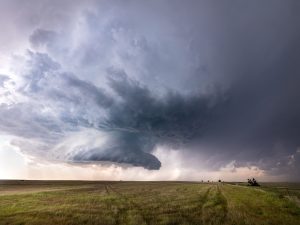 What is a tornado?

A tornado is a fast rotating, devastating column of wind, capable of uprooting trees and even destroying buildings.

Whats the difference between a tornado and a cyclone?

A cyclone is like a hurricane - a violent storm that covers a large area. A tornado is a much more concentrated twisting column of high speed wind.

What causes a tornado?

Sunshine warms ground level air which rises through colder air. This causes a thermal updraft that sucks up more warm air from the ground which will rotate if wind conditions vary in direction or speed. This causes more warm ground level air to be sucked up, which colides with cold air and creates more energy. A column grows downwards from the cloud and creates a tornado when it touches the ground

Do you know any interesting facts about tornadoes?  Share them in the comments below!

Are you fascinated with adverse weather conditions? Check out these incredible facts about blizzards!