Built to make it easier for people to cross the River Thames, Tower Bridge is one of London’s most iconic structures and features a central section that opens to permit ships to pass. Here’s some fun facts about Tower Bridge:

1. It took a good part of a decade to bring Tower Bridge to life.

Even though some people call it so, Tower Bridge isn’t

3. There were many different designs for the bridge.

50 designs for the bridge were submitted in 1876 but they were all rejected. It wasn’t until Sir Horace Jones came along in 1884 that a design for Tower Bridge was finally approved. The design has been attributed to both Horace, an architect, and Sir John Wolfe Barry, an engineer. 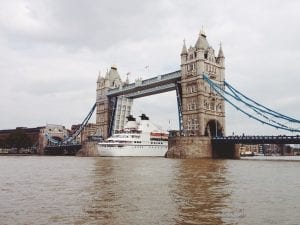 4. It wasn’t the first project for the architect in charge.

5. There were originally pedestrian crossings.

Tower Bridge has two high-level walkways that were initially designed to enable pedestrians to cross the bridge when the central span was open. But after falling into disrepair, they became one of the more infamous Red Light Districts in the city.

The walkways were closed in 1910. But they are part of the bridge’s exhibition these days, so they are open to the public.

Albert Gunther was driving a bus across the bridge in 1952 when it started to open. Rather than panic, Gunther accelerated. He jumped over the gap, making it safely to the other side.

7. A plane once flew through it!

Decades earlier in 1912, Frank McClean encountered an emergency that forced him to fly his short biplane between the bascules of Tower Bridge.

Tower Bridge was initially a dull brown color. To celebrate the Queen’s Silver Jubilee in 1977, it was painted red, white, and blue. It acquired the bright blue and white colors you see today during the 2008 – 2016 face-lift.

9. The Bridge once held up a US President.

In 1997, Bill Clinton was forced to wait for 20 minutes while the bridge was raised to let a ship pass. This is because ships on the River Thames have right of way. The bridge will always open to let them pass regardless of the identity of the person who has to wait while this happens. 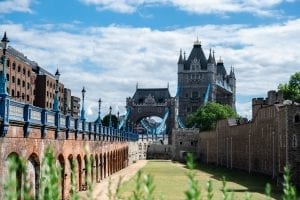 Tower Bridge has two levered sections that raise (at an 83-degree angle) to let ships pass. These sections are called bascules.

The word ‘bascule’ comes from a French word that means see-saw. Each section weighs an astonishing 1,100 tons!

The counterweights that swing to operate the bridge are found in a large cavern beneath the bridge called the Bascule Chamber. 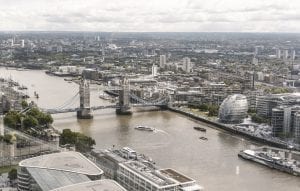 13. There have been plenty of gigs hosted at Tower Bridge.

Not only can you tour the chamber but it is sometimes used to host concerts. This is because it has incredible acoustics.

Initially, Tower Bridge was operated by coal-burning steam engines. In the 1970s, they were replaced with a system that uses electricity and oil.

There are more than 11,000 tons of steel in Tower Bridge. 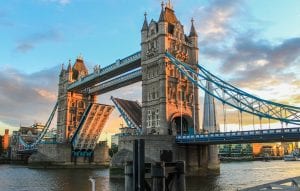 More than 70,000 tons of concrete were used in the foundations to support the structure.

Construction involved the use of 2 million rivets and 31m million bricks.

18. It took hundreds of people to build the bridge.

432 workers were involved in the construction of the bridge. 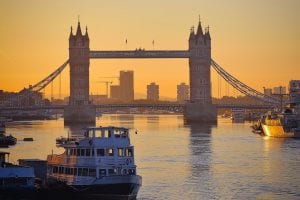 19. It’s a regular crossing for thousands of people.

Tower Bridge is crossed by 40,000 people on a daily basis.

Even though the bascules are extremely heavy, the bridge is typically raised in five minutes. 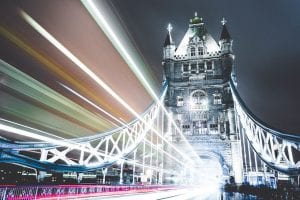 How much does its cost to walk over Tower Bridge?

When the bridge lift is down there is no charge to walk across, however to access Tower Bridge’s upper walkways and engine rooms there is a charge of over £10 - however, there are concessions, and you should consult its visitor information centre for up to date prices.

Is Tower Bridge safe at night?

Yes - Tower Bridge is considered safe at night, but if you don’t feel safe, you should make sure to arrange transport across.

Can you go up Tower Bridge?

Yes, it’s now possible to visit Tower Bridge from the inside, too - there’s a publicly open walkway.

Do you know any fun facts about Tower Bridge?  Share them in the comments below!

Are you fascinated with bridges? Then you should check out these incredible facts about the Golden Gate Bridge.