While many animals give birth to multiple young at a time, in humans, it’s actually very rare indeed! That’s why twin births are often seen as fascinating events. Let’s take a look at some fun facts about twins to try and break down a bit of the mystery.

Twin babies are known to reach out to each other in the womb. At the Italian university of Padova, research of twins in the womb concluded that a bond is formed prior to their birth. In fact, they have been seen to interact from 14 weeks!

2. What are fraternal twins?

Non-identical twins are sometimes called ‘fraternal twins’. Fraternal twins can run in families, too – meaning that some lineages can have lots of twin births – an odd phenomenon!

William Shakespeare was the father of twins. They were called Judith and Hamnet. 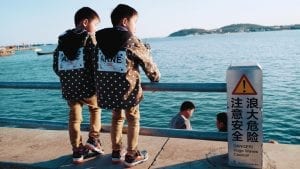 4. Twins can live for years and years.

In 2021, the oldest living twins in England, celebrated their 100th birthday in Rochester.

5. You likely can’t let your twin get away with murder.

Some people are surprised that even identical twins have unique fingerprints! No twin can blame their criminal activity on their twin, if fingerprints are involved!

Approximately 40 percent of twins in studies have been known to develop their own means of communication. Their special language is described as either cryptophasia or idioglossia. The latter relates to speech or glossary, and the former from Greek words.
‘Crypto’ means ‘secret’ and ‘phasia ‘means speech.

7. Twins have even taken over the wrestling ring.

Known in some sporting circles, ’Twin Magic’ took the world of wrestling by storm! Becoming wrestling champions In 2008, twin sisters called Nikki and Brie Bella are immensely popular inside and outside the ring – they have a huge following on social media too!

Castor and Pollux are the names of the twins represented by the sign of ‘Gemini’ in astrology. Pollux was said to have asked Greek God Zeus to allow him to share immortality with Castor who had been killed.

9. The Krays were pretty notorious twins.

The Kray twins were born in London on October 24th 1933. Reggie and Ronnie started and became part of a famous ruthless violent gang. A film and tv series were made about their lives – and they were captured and imprisoned for murder in 1968. 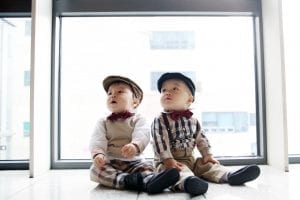 10. Some twins are super-wealthy.

The famous Winklevoss twins have a joint wealth in excess of $600 million! These entrepreneurs have several business ventures – most famously they started a social network site for Harvard students and invested in Bitcoin.Their amazing route to financial success features in the film The Social Network – both portrayed by Armie Hammer.

It’s not unheard of for twins to emerge with completely different skin tones – it all depends on the genetic makeup of their parents, of course!

12. Twins can even have different Dads.

Bizarrely, it is completely possible for twins to have two separate fathers, despite being born at the same time. That’s likely to lead to some pretty awkward conversations! 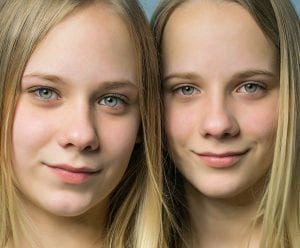 13. Your twin’s health? Not always your own.

Twins are not necessarily likely to develop the same conditions and illnesses over time. In fact, many will find that they have different ailments to the other.

14. Twins aren’t even the same age all the time.

In some cases, twins can be born days, even years apart – hardly fair on Mom, is it?

Parents of twins are, it seems, more likely to file for divorce than non-twin parents. Harsh but true! 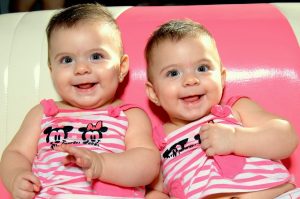 Research seems to suggest that twins have what’s known as a ‘neural bridge’. This means that they have something of a mental link or connection – does it mean they can read each other’s minds? Who’s to say…

What are the three types of twins?

Twins are often classed as identical, fraternal, or conjoined.

Which parent carries the twin genes?

It’s down to the mother - if there’s twins in the Mom’s lineage, then there’s a chance they will have two babies at once, too!

Is it possible to have twins without it running in the family?

Yes - the general odds are said to be roughly one in 250.

Do you know any fun facts about twins? Share them in the comments below!