Patriotic Facts About US Independence Day

The 4th of July, of course, is a date that most Americans know well – celebrating the union of the country dating back hundreds of years. It’s perhaps the best-known and most-celebrated holiday across the states – and it’s recognized overseas, too. If you’re in the spirit of the occasion, here are some fun facts about US Independence Day worth keeping in mind.

Independence Day wasn’t celebrated for the first time until 1801. This is actually many years after the US declared itself separate from Great Britain – the actual date of true independence is 4th July, 1776. The first celebrations took place at the White House, however, some 25 years later.

2. It wasn’t a full holiday for a while, either.

The people of the US had to wait even longer to celebrate independence, as it wasn’t officially recognized as a full, national holiday for another 69 years, in 1870! For the national holiday to launch, it even had to pass through law and congressional checks – as do all statutes and legislation in the modern age.

Independence Day revolves around the signing of a single document – the Declaration of Independence, which was drawn up and dispatched to Great Britain. It requested that America be freed from British rule. It was drafted up by the legendary Thomas Jefferson, who many will know as the third President of the USA. 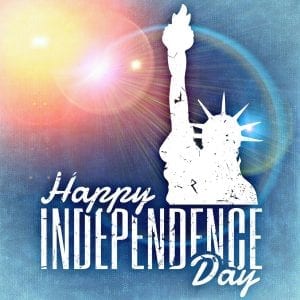 4. Celebrations rolled out regardless of official documents.

Despite the fact that Independence Day wasn’t officially enshrined as a holiday until 1870, it’s thought that citizens were celebrating the event many, many years before – as early as a year after independence actually took place!

5. People from all walks of life signed for freedom!

It’s a common myth that everyone who signed the Declaration of Independence was well-educated. Believe it or not, only about an eighth of all signatories were graduates from Harvard University.

With independence, came all kinds of important and tense decisions to make. For example, the declarers had to decide upon what their new national bird should be! Benjamin Franklin – for all his wisdom – even pitched that the turkey become the US’ national bird – they eventually decided upon the bald eagle, of course!

7. Lots of people had their say.

The Declaration of Independence wasn’t a small document just signed by a few people. It had around 56 signatories. It was even signed by people residing in and representing several colonies of the US.

There are many different parades and traditions that take place around the 4th of July. The town of Bristol in Rhode Island, however, may be home to the oldest independence parade in the US – they started celebrating more than 230 years ago – and they don’t intend to stop the tradition any time soon!

US Independence Day happens to be a massive affair for outdoor BBQs. It’s said that hot dog merchants will benefit hugely during the holiday, with more than 150 million hot dogs enjoyed during this period alone – each year! It’s a time for people to come together with all kinds of traditional recipes and hearty ‘American’ food and drink, too. 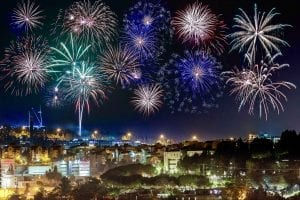 FAQs about US Independence Day

Why do we celebrate US Independence Day?

US Independence Day is celebrated to mark an agreement made between America and Britain for the former to rule over its own states. It’s known as the Fourth of July for short.

What was the US called before it gained independence?

Before the US gained independence from Britain, it was known as the United Colonies.

How long did Britain rule America for?

Britain had control over colonies in America from at least 1607, when it established Colonies of England - meaning it established rule for around 170 years!

Do you know any fun facts about independence day?  Share them in the comments below!