The Palace of Versailles, in French known as Château de Versailles, is a former French royal residence and centre of government. Now a national landmark it’s located in the city of Versailles, northern France, just 10 miles (16 km) west-southwest of Paris.

Once referred to as the epicentre of French royalty, the elegant estate has undergone several transformations since its conception in the 17th century. Versailles is a national treasure, a “story”, beginning with humble roots and ending with an everlasting legacy. To initiate the storytelling process, read these 38 fun facts about Versailles…

1. Why was the palace built?

The Palace of Versailles was built in 1623 by Louis XIII. The original residence was primarily a hunting lodge and private retreat for the king, who reigned 1610–43, and his family.

In 1624 the king entrusted Jacques Lemercier with the construction of a château on the site. Its walls are preserved today as the exterior facade overlooking the Marble Court.

3. His successor transformed it even further.

Under the guidance of Louis XIV (reigned 1643–1715), the residence was transformed (1661–1710) into an immense and extravagant complex surrounded by stylized French and English gardens. 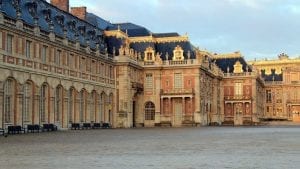 4. It was a royal stronghold for many years.

The Palace of Versailles remained the French Kings’ home until the French Revolutionaries killed the King, Queen, and imprisoned their kids.

5. It was an important political seat.

The court of Versailles was the seat of French political power only from 1682 to 1789.

When it was fully operational around 5,000 people including aristocrats, courtiers and servants lived in the Palace.

8. Building the palace was painstaking.

It took 36,000 workers to construct the palace and its gardens.

9. Its gardens alone were enormous. 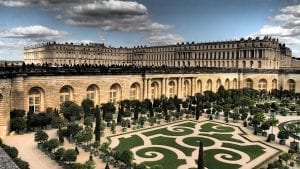 10. It was amazingly expensive.

The palace of Versailles would cost over $2.5 billion to construct in today’s money.

11. No other royal stronghold comes close!

The palace of Versailles is the world’s largest royal domain.

12. The opera house is important, too.

The Royal Opera of Versailles was architected by Ange-Jacques Gabriel and that’s why is also known as Theatre Gabriel. 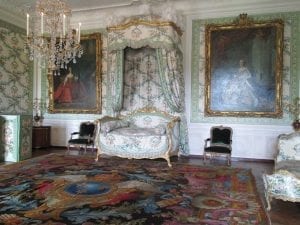 It was inaugurated in 1770 and for a long time was the largest Opera house in the whole of Europe.

The Treaty of Paris of 1783 that was signed at Versailles, ended the revolutionary war between the British and the United States of America, and recognized American independence.

15. The Revolution nearly saw the palace fall to dust.

The French Revolution which started in 1789 almost destroyed the Palace of Versailles. 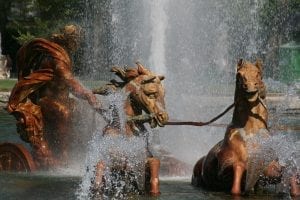 One of the 1,400 fountains that adorn the Palace of Versailles

When the French Revolution began, rioters landed at the gates of the Palace. The 80-meter steel gate, which was decorated with 100,000 leaves of gold, was destroyed.

Almost 220 years later, the Golden Gate was restored to its former glory. In 2008, thanks to private donations, the gate was restored and 100,000 leaves of gold were added.

The whole restoration cost €5 million Euros ($8 million US dollars – back then this was the exchange rate).

During the French Revolution, the artwork at the Palace of Versailles was relocated to the Louvre for safekeeping. 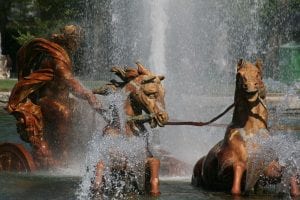 19. However, the palace fell out of relevance.

After the French Revolution, the Palace was largely ignored and it fell into disrepair.

Louis-Philippe, who became King of France in 1830, decided to dedicate the Palace of Versailles to all the glories of France.

He decreed that the palace should become a museum and showcase the glorious history of France.

The Treaty of Versailles, signed on the 28th of June 1919 brought World War I to an end. The treaty was signed in the Hall of Mirrors. 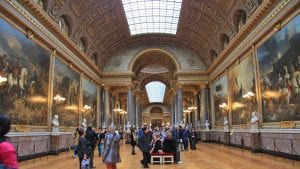 22. How many mirrors are there?

The Hall of Mirrors, perhaps the most famous room in the Palace of Versailles has a total of 357 mirrors.

23. What is the Corridor of Light?

When other royals and dignitaries came visiting, the Hall of Mirrors was lit up with many candles transforming it into what the historians call the ‘corridor of light.’

24. The palace was awash with candles.

It is believed that depending on the occasion, sometimes as many as 20,000 candles were lit.

The Hall of Mirrors, Palace of Versailles

25. It is purely of French creation.

All the materials used in building and decorating Versailles were made in France.

26. France brought in the best mirror-makers.

At the time Venice had a monopoly on making mirrors so Venetian artisans were lured to France.
The Hall of Mirrors, Palace of Versailles

The Venetians then ordered the assassination of the mirror makers for giving their secrets away. 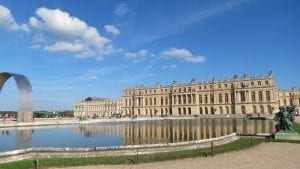 28. Everyone loves a party!

Kings who stayed in Versailles Palace loved ceremonies. They loved it so much that even the Kings’ going to sleep and waking up were converted into ceremonies.

29. Rooms were themed after the stars.

The King’s Apartments consisted of five rooms – The Guard Room, The Royal Table Antechamber, The Bull’s Eye Antechamber, the Council Chamber, and the most private King’s Bed Chamber. 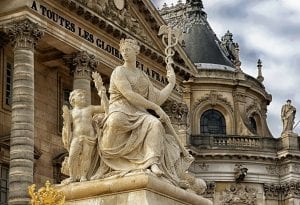 31. Everything here was opulent.

One example of the luxury of Versailles was that even the chamber pots were made of silver.

Louis XIV melted down the chamber pots at the Versailles and used it to finance his wars against Britain and other European nations.

The Palace of Versailles contains around 6,000 paintings and 5,000 pieces of furniture and other objects.

34. There are many places for worship here.

Five chapels have been built in the Palace of Versailles so far.

35. It was a staple haunt of Marie Antoinette.

The wife of Louis XVI, Queen Marie Antoinette, built her estate on the Versailles, called “The Petit Trianon”. She used this as a personal retreat.

The apartment used by Queen Marie Antoinette included a hidden door in the bed-chamber, which she used to escape a mob during the revolution.

36. The palace design made for chilly dinners.

The Palace of Versailles’ kitchens and the king’s dining room were located quite far away from each other, as a result, the kings’ meals were often served cold. 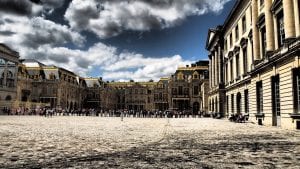 37. It was an expensive household.

Running the Palace of Versailles was a costly affair. Some estimates say that the annual cost of maintaining the Palace would have been anywhere between 5% to 25% of the French government’s income.

As of today, Versailles is a well-preserved World Heritage site visited by more than 10 million tourists every year.

How long has the Palace of Versailles been a World Heritage Site?

The palace has been protected on the World Heritage list now for more than 30 years!.

Does Versailles have toilets and bathrooms?

Yes, but believe it or not, toilets weren’t installed at the palace until the 1800s!

How historically accurate is the Netflix series ‘Versailles’?

There are some characters created purely for the show - fans may find, however, that the series is mostly based on real events.

Do you know any fun facts about Versailles? Share them in the comments below!