If your knowledge of the warthog starts and ends with ‘The Lion King’, it’s time to clue yourself up! While not the prettiest of creatures, these tusked beasts are some of the most fascinating you’ll find in the wild. It’s well worth keeping your distance, as they’re fairly dangerous.

Take a look at these 25 fun facts about warthogs – who knows, you might learn something new about these rugged porkers!

1. The name ‘warthog’ is actually misleading.

Warthogs are so-named thanks to their warts. That’s pretty obvious! However, their ‘warts’ aren’t warts at all.

They are actually growths which are normally mostly cartilage, and sometimes bone.

Warthogs share a lot of similarities with elephants in the sense that they have huge tusks. This is one of the best ways to tell a warthog and other types of boar apart.

Warthogs have impressive lifespans. You’ll generally expect a porker to live up to between 15 and 20 years old in the wild. 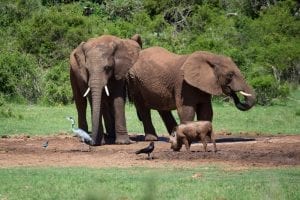 4. You’ll never get one over on these piggies.

They are fantastic at defending themselves. With tusks like these, that’s not hard to imagine. They are primed to fight with built-in spikes.

Warthogs will also use their tusks to dig into soil. This is so that they can unroot bulbs and roots in the ground, which they will happily feast on!

However, you’ll never find a warthog digging its own burrow. They are stealthy and make a point of taking over burrows if they find them particularly interesting.

This means that some animals, such as aardvarks, find themselves homeless.

6. They sometimes move in reverse.

The warthog is known for a few slightly odd behaviors, especially when it comes to moving around. They enter their burrows in reverse, for example.

You’ll also find that a warthog bends down onto its wrists when it chows down to eat.

There is generally one species of warthog that most people will be familiar with. This, funnily enough, is the common warthog.

However, there is also the desert warthog, which you will find across parts of Africa. These mammals are thought to be declining in number.

8. They rock a mean mohawk.

Warthogs have interesting hair. They have a full mane, which travels down their spines towards their tails.

It’s thought that the average warthog tusks will grow to be around 150cm long. Not to be trifled with, in that case! 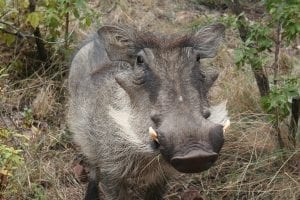 10. Warthogs can get rather large.

A warthog can weigh in at up to 250lbs, though there are many which will only grow to be half this bulk. Generally, though, they are pretty rotund.

It’s not unheard of for warthog sows to live in groups of up to 40. These are called sounders.

However, it’s rare that you will find male warthogs to be quite so social. They tend to go about their own business and can get pretty aggressive when it comes to territory.

There aren’t really any set times of day when warthogs are likely to hunt or forage. They prefer the day but will forage at night if daylight proves to be too dangerous. 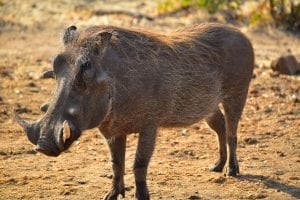 The diet of the average warthog is pretty interesting. In the whole, they are herbivores, which means that they don’t hunt for meat or prey as such. However, they will eat dead bugs if desperate.

Warthogs are prey for many apex predators. Animals such as hyenas and lions will often hunt them down. Makes you rethink ‘The Lion King’ somewhat!

However, warthogs are known for being rather fierce, meaning they won’t come quietly. Having a huge pair of tusks built-in certainly helps!

15. It’s not just the tusks you should be wary of.

They have razor-sharp teeth, too. These teeth are so sharp that they can cause serious damage to predators if they get on the wrong side of a warthog. 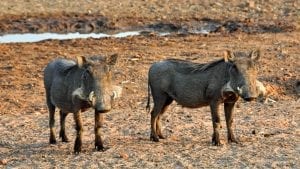 16. They tail each other, literally.

Warthogs love to follow each other – females, in any case! They know which hog to follow, generally, if they have a tail up in the air.

The odd behavior that warthogs show when backing into burrows arises as a result of being able to attack tusk-first. It’s a security system which allows the last hog in to act as a guard on patrol.

18. They’re somewhat happy to bond with others.

Warthogs do get on well with some other creatures, despite being territorial. For example, they have a partnership with mongooses – as a mongoose will happily groom a warthog in return for some tasty ticks. 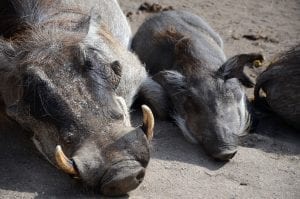 19. Young warthogs are always under threat.

Sadly, while warthogs can live to be a ripe old age, there is always the chance that piglets will be snatched up and eaten.

A warthog sow is likely to give birth to up to four piglets per litter.

Warthogs tend to be fairly muddy creatures. This isn’t as a result of poor hygiene, but of protection. Hogs will roll around in mud to prevent parasite attack.

It’s thought that a mud-covered warthog will also be well-protected against the sun, too. 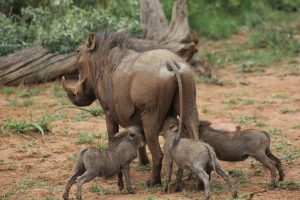 A warthog piglet will generally mature by the age of a year and a half. Female piglets will stick with their mothers to form sounders, while males will generally go roaming.

23. Warthogs can set up multiple hideaways.

Warthogs aren’t known to stick to a single burrow for the fact that they will need to duck for cover when predators approach. This means that they are known for multiple burrows that they can use as separate hideaways.

24. The warthog is generally under threat.

Sadly, warthogs are often hunted for poaching. This is because many use their tusks in the ivory trade.

What’s more, they are hunted for meat, too – though it’s normally their tusks that catch poacher attention. 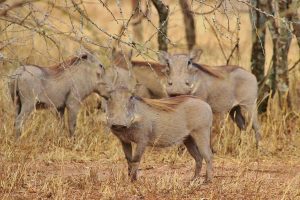 While warthogs are known to forage at night if things get dangerous, they generally follow the same sleep patterns as us. They are active in the day, and sleep when it gets dark. This is likely due to what they deem to be the safest of cycles.

They can be, as they have a very territorial nature, however, they are not always on the attack or defense!

Are warthogs faster than lions?

Sadly not - on the whole, warthogs are not that speedy, which is why they have to rely on their tusks to fight back.

What are baby warthogs called?

Much like pigs, baby warthogs are referred to as piglets!

Do you know any fun facts about Warthogs? Share them in the comments below!

Are you fascinated with African wildlife? Why not check out these zany facts about Zebra…