Have you ever been water skiing before? Many people will tell you it’s the most fun you can have hanging off a boat – you’ll never know if you like it until you try it! Here are some intriguing facts about the water sport to entice you to give it a go.

1. Water skiing was an Olympic sport!

Yes, water skiing has been enjoyed at an Olympic level – it was added to to Summer roster back in 1974, after a trial in 1972.

2. What’s the world record for the most people water skiing at once?

Up to 145 people have water skied off the back of a tow boat – making that an amazing world record back in 2010. They beat it with 45 more riders than the previous record holders!

3. Water skiing has been a competitive event for decades.

Water skiing first started becoming popular competitively back in the 40s, thanks to avid skier Dick Pope Sr – he helped to lead the pastime towards the tournaments it’s known for in the modern age! 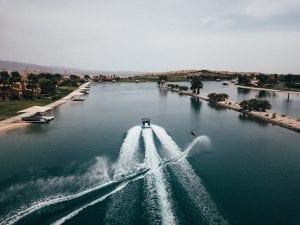 4. Chances are you might want to water ski if you’re on vacation somewhere wet!

Water skiing is largely enjoyed all over the world, and it’s also a very popular tourist sport. In fact, in many cases, you’ll find that hotels and hostelries have equipment you can hire if you’re near a popular spot.

5. What are water skis made of?

Water skis are made in all kinds of materials. Did you know that you can ski on water with boards made of wood, fiberglass and aluminum?

It’s illegal for a boat to tow a water skier if there are fewer than two people inside. You need one to be a captain and the other to act as second. This means water skiing is always a three-person occasion.

There are more than 600 different water skiing clubs across the US – it is seriously a very big deal in North America!

8. There are only a handful of water skiing records.

As a sport, it’s interesting to note that there are only a relative few records set for water skiing in the Guinness Book of World Records. Therefore, if you know you’re a dab hand (or foot) at the pursuit, now’s the time to break some scores!

It’s entirely possible to ski on water without the boards. This is called barefooting, and it’s only really advisable for experts at the sport! 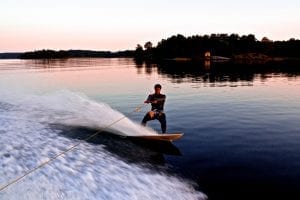 Many people have turned water skiing into an acrobatic event. Have you ever dared flip or somersault in the air when skiing on the water? Those that do – are braver than us!

Ideally, any water you choose to ski in should be around 60m, or 200 feet, wide at the least – with a depth of at least 2m or six feet. Otherwise, you’re at risk of hurting yourself and others, or worse.

Did you know that some professional water skiers have included ramps in races and slalom events? Again – they’re braver than us – but they really do make it all look easy! 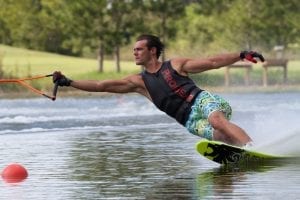 13. There have been international bodies for the sport in place for decades.

The first international organization for the sport, the International Water Ski Federation (or IWSF), was founded in 1949.

14. Ever tried doing a figure eight on the water?

It’s entirely possible to treat water skiing like figure skating. For figure skiing, you need to make sure your skis are much shorter than the average – it helps you to create shapes and perform specific stunts.

15. It might still be an Olympic sport… keep your eyes peeled!

There are, reportedly, attempts being made to try and bring water skiing back to the Olympics. It’s not been seen since its debut and only appearance back in the mid-70s. Who’s to say it won’t catch on again in the years to come? We’d love to see it! 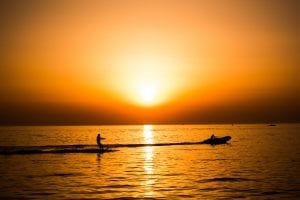 Water skiing was invented by Ralph Samuelson in Minnesota in 1922. However, the first skis weren’t patented until 1925, by Fred Waller.

Where did the first water ski event take place?

How fast does a motorboat need to move for you to water ski?

For water skiing, a motorboat pulling you along should reach speeds of around 15 miles per hour, or 24 km per hour.

Do you know any fun facts about waterskiing? Share them in the comments below!