Whiskey is one of the most-drunk alcoholic spirits in the world. However, there is a certain way of making whiskey, and the way it tastes can really differ from bottle to bottle, and from place to place. Even if you are a seasoned whiskey drinker, there may still be plenty of facts about the spirit that will surprise you. Here are a few fun facts about whiskey to mull over the next time you have a bourbon on the rocks.

1. Whiskey takes a while.

Whiskey is well-known for taking a long time to get right. Good things come to those who wait! However, the age of the oldest whiskey in the world might astound you. The Guinness World Record holder for the oldest whiskey is the Glenavon Special Liqueur, which is thought to have been first packaged in 1858. That means there’s a bottle of whiskey out there that’s almost 200 years old!

2. There’s a six-figure bottle out there.

The most expensive whiskey on the planet is sure to make your bank manager’s head spin. The biggest sale at auction for a bottle of whiskey came to an equivalent of £393,109 – the Macallan ‘M’ is thought to be the priciest bottling of the spirit on the planet.

The word ‘whiskey’ translates into something rather telling. It actually comes from ancient Gaelic, and it is thought to mean ‘the water of life’. 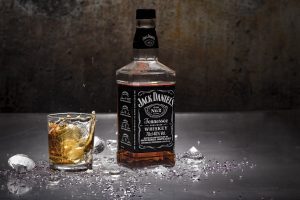 Whiskey, unfortunately, is known to evaporate during production. Don’t worry, however, as only around 2% disappears during barrel storage. Many in the trade refer to this 2% as ‘the angels’ share’.

5. There’s a benchmark for strength.

It’s thought that a strong bottle of whiskey – or one good enough to retail – should be at least 40% volume, meaning that there are never going to be any bottles of the stuff that won’t give a nice kick or two. Many bottles go well beyond 40%, however, so take it nice and slow!

6. Can whiskey help your health?

It’s thought that whiskey has hidden health benefits. Studies, of course, are always ongoing. However, research seems to suggest that it can help the body fight against strokes and cancer and drinking up to six glasses of whiskey a week could help to cut your dementia risk. However, as always, drinking in moderation is encouraged.

7. JD is a premium brand of whiskey.

Jack Daniel’s is one of the most popular whiskey brands in the world and is well-known for producing delicious flavor variations. Rat Pack crooner Frank Sinatra was such a fan of the smooth JD that he asked to be buried with a bottle by his side. His wishes came true!

8. Some whiskies come in odd bottles.

Glenfiddich is a brand of whiskey that’s interesting for its unique bottle shape. Rather than having round edges, it is triangular. This is thought to pay tribute to the three main ingredients in the whiskey making process, specifically air, barley, and water. Of course, there is more to brewing a good whiskey than just putting those together!

While single malt whiskey tends to be associated with breweries up in Scotland, the country actually exports more blended spirits than single malt bottles. 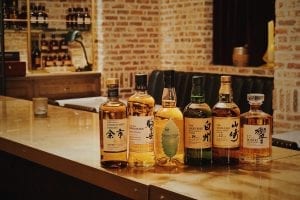 A selection of Japanese whisky

France is extremely passionate about whiskey – so much so, that it’s thought just less than 50% of all retail sales for spirits in the country revolve around whiskey. Of course, France is very much a wine nation – but whiskey seems to be a runner-up for favorite tipples amongst the French!

11. The Scottish take the lead, though.

Scotland is well-known for being a hotbed of whiskey brewing and bottling. So much so, that there are thought to be more than 20 million unique casks nationwide, each one used for developing a delicious blend. Statistically, there are around four casks per person living in Scotland right now.

Scotch is a type of whiskey that has a few specific requirements expected of it. As you may imagine, it must only come from Scotland itself. 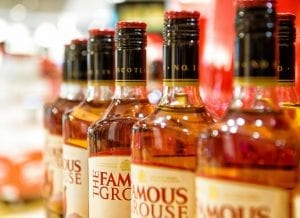 13. Whiskey can last for decades.

Whiskey is preferred by many people as a premium alcoholic drink to wine. That’s because it is known to last much longer. You could, in effect, keep a bottle of whiskey for more than 100 years, pour it out, and still have it taste the same! The effects are incredible! What’s more, many people invest in aging whiskies as they tend to be collector’s items. Some bottles go for thousands at auction, if they are rare and/or old enough to catch a buyer’s interest.

What’s the difference between whiskey and whisky?

They are the same thing - but in the US, it’s spelled with an ‘e’! The Irish spell it this way, too.

Is whiskey a stronger drink than vodka?

In many ways, yes. Spirits experts will tell you that vodka tends to have much less flavor and thus less of a ‘kick’.

All kinds of things - it depends on how it’s made. Whiskey tends to carry an oaky, smoky flavor.

Do you know any fun facts about whisky?  Share them in the comments below!

This page was last modified on December 22, 2022. Suggest an edit