Wiltshire is well-known for its countryside scenes, walks and incredible history. However, it’s not all listed buildings and stunning vistas. Even if you live in the region, there might still be a few facts and figures about the county which might just surprise you.

Let’s take a look at a few fun facts about Wiltshire – who knows, they might just surprise you!

There are a number of areas in Wiltshire which hold the ‘purple flag’. These towns and cities are marked particularly for their safe scenes, and the fact that their nightlife offerings tend to be amongst the safest in the UK. Both Chippenham and Salisbury have received these accolades.

2. Oxygen was ‘discovered’ in Wiltshire.

While we all pretty much ‘discovered’ oxygen the day we all started breathing, the official ‘discovery’ of the element took place here, specifically in Calne. The theory and discovery of the element is credited to Joseph Priestly, a local Earl’s librarian who experimented with separation of air and mercury. He used candles to analyze oxygen, too. This happened all the way back in 1774!

3. The cathedral scene is magnificent.

Salisbury Cathedral is something of a marvel to many building enthusiasts and history buffs. That’s because it not only has the biggest spire of any cathedral in the UK, but that it was actually designed and built completely within a century. This, believe it or not, is pretty rare for any kind of similar building. 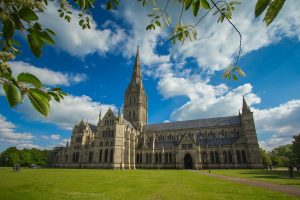 4. Some of the most popular authors of all time were born here.

William Golding was a school teacher in Salisbury – at Bishop Wordsworth’s – and some believe it was his observation of pupil behavior here which went on to help him write the iconic novel The Lord of The Flies. In Golding’s book, a band of schoolboys wash up on a desert island and are forced to fend for themselves.

5. It is cycling country.

Wiltshire is very popular with active people for its amazing cycleway. This cycling paradise is more than just your run of the mill bike promenade. It’s around 120 miles long and is amongst several national cycling paths which intersect the lower reaches of the county.

6. Wiltshire’s roundabouts can be rather odd.

Swindon is home to what has become colloquially known as the ‘Magic Roundabout’, a transport oddity so curious that it even has its own Wikipedia entry. This colossal, often complicated roundabout system has six of its own miniature roundabouts, and almost 40 different directional exits. It seems Wiltshire might not be the best place in the UK to learn to drive if you have trouble with roundabouts!

7. It was a huge transport hub.

Wiltshire underwent something of a railway revolution between the years of 1851 and 1901. As transport across the UK started to evolve, the county was well-known for providing extensive employment to local people in the form of rail staffing. It’s thought that 12 times as many people were employed on the railways than there were 50 years previously.

Wiltshire is, of course, known to millions worldwide as the site of the stupendous Stonehenge. This ancient stone circle has mystified people for decades, even centuries. In fact, there’s also been plenty dug up from near to the circle, or around it. There are more than 300 different Stonehenge artifacts which you can see on display in exhibitions close by.

It’s thought that – taking into account all the man hours that went into creating the circle – around 15,000 years were invested in the building of Stonehenge. It’s a wondrous site to visit and certainly deserves our respect and admiration!

10. Ever seen a faceless clock?

There is a rather strange clock which you’ll find in Westbury – specifically, at the All Saints Church. It’s here where you’ll find a clock without a face!

Wessex was a kingdom in England which has since devolved over the centuries. However, it has an important and historical link to Wiltshire’s past. So much so, that the county wouldn’t have its name without the town of Wilton, which was once the capital of Wessex.

12. Here’s some more famous people from the county.

Famous people born in Wiltshire include Ian Fleming, James Bond creator and author – it’s also the birthplace of Sting, who recorded many of his songs at home in the county. 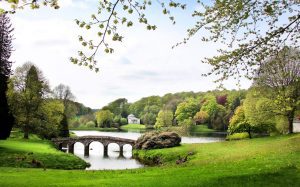 What is Wiltshire actually known for?

Wiltshire is a county that is mainly known for its ancient history, though you will also know it for its delicious ham and bacon!

What is the biggest Wiltshire town?

In all of Wiltshire, Swindon is the biggest town, with Salisbury and Trowbridge not too far behind.

People from Wiltshire are often referred to as moonrakers, based on local legend that Wiltshire smugglers would try to ‘rake the moon’ out of brandy they were bringing out of a pond - it was a ruse!

Do you know any fun facts about Wiltshire?  Share them in the comments below!

This page was last modified on October 4, 2021. Suggest an edit

⚔️ 11 Heroic Facts about the Battle of Hastings