This Californian landmark is an iconic and breathtaking suspension bridge, but is there any more to it than that? You’re about to find out with these 11 fun facts about The Golden Gate Bridge…

1. Who designed the Golden Gate Bridge?

The Golden Gate Bridge was designed by Joseph Strauss in 1917.

2. It took four years to build – to everyone’s surprise.

Construction started in January 1933. It was actually finished early and under budget!

In fact, it was millions of dollars under budget and opened its doors in May 1937.

3. It’s a big linker between cities and counties. 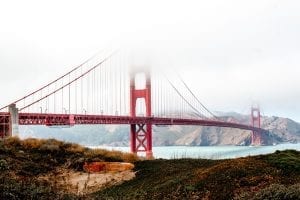 4. The bridge took the place of a ferry trip.

There used to be a lucrative ferry service in place of the bridge. It had been fully booked from the moment it opened for business way back in 1820.

5. The name ‘Golden Gate’ is well-travelled.

The ‘Golden Gate’ part of its name dates back to 1846. This is when a traveling photographer said the area reminded him of the Byzantium harbor called ‘Golden Horn’.

6. Building the bridge was a perilous affair.

A giant net was suspended under the bridge during the building process. It successfully caught 19 falling workmen.

7. However, the net didn’t save everyone.

The safety net failed to save the lives of 11 workers on the bridge.

8. It was a record-breaker for the time.

At 4,200 ft across, it was the longest suspension bridge in the world when it was finished. It would hold this title until the Verrazzano Bridge in NYC beat it in 1964.

The original plan was for it to be painted a rather garish black and yellow! 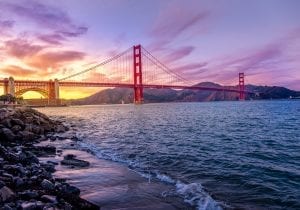 10. It was amazingly expensive!

In today’s money it would cost a little over $600 million.

11. It only closed down for two people, ever.

FDR and Charles de Gaulle are the only people in history to have had the entire bridge shutdown for their visits.

FAQs about The Golden Gate Bridge

Did the Golden Gate Bridge ever collapse?

Yes - there was a rare collapse that occurred in May 1987, when the golden anniversary of the bridge resulted in hundreds of thousands of people getting stuck.

How deep is the water beneath the Golden Gate Bridge?

The water below the Golden Gate Bridge is reportedly 115m, or 377 feet, deep.

How many people have jumped off Golden Gate Bridge?

Sadly, the Golden Gate Bridge has seen more than 1,400 people leap off during its tenure. Hundreds of people are helped down from jumping attempts each year. Always make sure to contact someone at The Samaritans if you have any of these feelings of your own. There is always someone who can help.

Do you know any fun facts about the Golden Gate Bridge?  Share them in the comments below!

Are you fascinated with bridges? Check out these interesting facts about Tower Bridge in London.