Pizza is a delicious dish made of bread, tomato, cheese and more. While it originated in Italy, there are many, many different localisations on the classic! Here’s a thick-crust stack of fun pizza facts to whet your appetite.

It’s thought that we buy and consume more than five billion pizzas, globally, each year.

2. We’ve been eating pizza for centuries.

Pizza supposedly dates all the way back to the 16th century, but no one is quite sure exactly when or how. It appears to have kicked off in Naples, Italy.

3. We weren’t always mad on tomatoes.

What’s off about pizza’s origins is that tomatoes weren’t necessarily seen as edible centuries ago – they used to be quite poisonous. 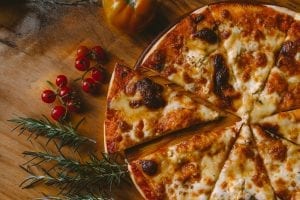 4. The US embraced pizza fairly late on.

Pizza didn’t actually start becoming a big deal in the US until after World War II. Why? It’s thought soldiers based abroad in Italy during the 30s and 40s developed a taste for the local cuisine.

5. A Japanese pizza is a fairly interesting premise.

Japanese pizza fans tend to like their toppings to be a little different to us westerners. In Japan, you’re likely to find pizzas topped with mayonnaise, potatoes and squid. Yum?

Head to Las Vegas and you’ll find that the International Pizza Expo shows off the latest and greatest culinary creations in the field.

It’s thought that US soldiers have access to a pizza that can be kept in storage for up to three years without it spoiling or losing its flavor!

8. There are many, many books on pizza out there.

Pizza seems to be a popular topic, as amazon.com currently hosts more than 26,000 unique books about the delicious dish.

You don’t have to eat bread to enjoy pizza. In recent years, innovations such as cauliflower and beetroot bases have made the treat that little bit healthier. 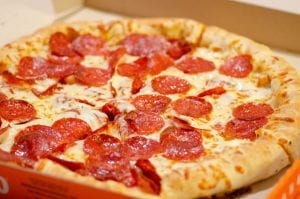 Ever had a Hawaiian pizza? It has nothing to do with Hawaii. It was invented by a Greek chef who was serving pizza in Canada at the time!

11. Pineapple on pizza was a mistake, no matter how you look at it!

Yes – pineapple on pizza is actually the result of a mix-up, as the inventor of Hawaiian pizza apparently grabbed pineapple chunks instead of pepperoni – and decided to take a bold risk.

12. The thinner the better!

Most people appear to enjoy thin crust when it comes to ordering pizza. 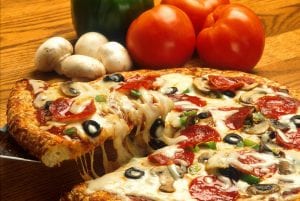 In New York State alone, it’s thought that there are more than 9,000 different pizzerias. To say the Italian staple has found a life of its own out here is an understatement.

15. Eating pizza once a week might help protect you from cancer.

Yes – studies have actually shown that a regular pizza meal could help to reduce your chances of developing colon and oesophageal cancers. 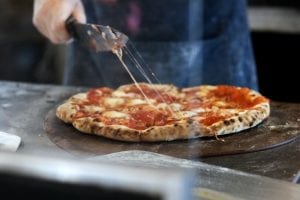 The first person to order pizza online did so in 1994 – it was one of the first food orders ever made via the web.

17. The red stuff could help you live for longer.

It’s thought that tomatoes are fantastic at helping to boost your natural immunity. 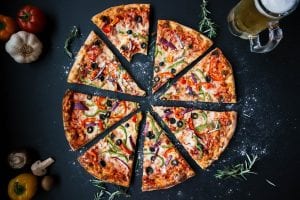 Is pizza Italian or Greek?

While there are Greek twists on the dish, pizza is almost certainly an Italian dish, and it dates back to ancient Naples.

Which country eats the most pizza?

It’s Norway - the average Norwegian person will eat around eleven full pizzas to themselves each year.

What’s the most popular pizza topping?

Globally, it’s thought that pepperoni is the most popular topping, with mushrooms not too far behind.

Do you know any fun facts about pizza? Share them in the comments below!

Who doesn’t love fast food? But before you just dive in, check out these facts about McDonald’s nutrition!