KFC, or Kentucky Fried Chicken, is one of the biggest fast food brands on the planet. Since the 1950s, the American chain has been a familiar sight not only across the US, but over into Europe and beyond.

Here are some finger-licking facts and figures about Colonel Sanders’ brand that might just surprise you.

1. Where did KFC originate?

KFC opened as Kentucky Fried Chicken for the first time in 1952, in Salt Lake City.

2. It was just Kentucky Fried Chicken for a long time.

It wasn’t officially referred to by the chain as KFC until 1991 – however, it was a nickname that many people had used.

‘Colonel’ Harland Sanders is the man behind KFC – he actually started out selling fried chicken from a gas station! He’d been doing so since 1930 – meaning KFC is actually older than you think. 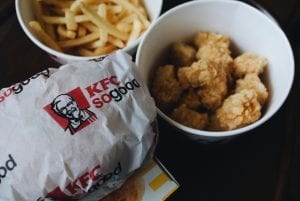 4. He wasn’t actually a colonel at all!

Sanders actually earned the title within five years of starting his chicken enterprise – picking it up as an honorary moniker thanks to his delicious food.

KFC is a festive staple in Japan. In fact, it’s customary to enjoy food from the restaurant on Christmas Eve and Day! It’s been a big trend ever since the 70s, when KFC ran what remains one of the most successful marketing campaigns of all time.

6. The famous bucket wasn’t available at the start.

KFC buckets – where you can enjoy different pieces of chicken in a family-sized serving – didn’t come about until the late 1950s. Before this time, you’d have to buy chicken piece by piece from the Colonel himself!

Kentucky Fried Chicken reportedly drifted more towards KFC as a name not because of popular use, but in response to concerns over ‘fried’ being a negative word – and bad for business.

8. Will we ever know the true recipe?

The famous KFC recipe (of ’11 herbs and spices’) is locked away in a safe at the HQ in Louisville. Many people believe they’ve cracked the recipe, but it’s never been confirmed.

9. KFC hasn’t used ‘Finger Lickin’ Good’ for over a decade.

The famous slogan was actually retired in 2011. KFC’s been leading with ‘So Good’ instead for over ten years – the original marketing really stuck with us! 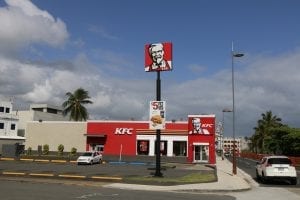 KFC once took to the desert outside Area 51 to create a logo you could see from space. It was around 87,500 square feet!

12. KFC is bringing out its own home games console – no, really.

Yes, weirdly, the KFConsole is real. As of the time of writing, it’s yet to be released – but the unique gaming system is said to boast 4K graphics and even a space for you to keep chicken warm. 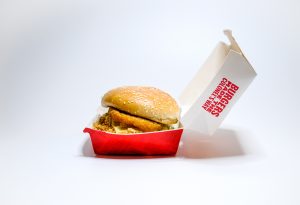 Is KFC owned by Pizza Hut?

No, but as of the time of writing, KFC and Pizza Hut are owned by the same parent company, ‘Yum!’. They also own Taco Bell.

How many KFC restaurants are there?

According to KFC’s official stats, there are more than 25,000 different KFC locations all over the world. They can be found in more than 145 different countries, too.

In which country is KFC the most popular?

Funnily enough, it’s China, as they have more KFC restaurants than any other nation - around 20% of all KFC locations can be found in China!

Do you know any fun facts about KFC?  Share the in the comments below!