It’s hard to believe that there was a point in time where there were no chicken wings on any menus around the world, but this was, unfortunately, the case before 1964.

Although you may love chicken wings, you may not be completely aware of the nutritional aspect of them. Here are some fun facts about chicken wings that you might not have known about.

The nutrition of chicken wings can vary depending on the way it is prepared. Fried chicken has significantly more calories, fat, and carbohydrates if it is done with breading and flour. However, the nutrition profile is similar to the roasted chicken wing if you just eat the meat from the fried chicken wing.

2. It’s worth keeping the math in mind.

According to a research paper published in 2015 by Food and Nutrition Research, the meat part of the fried or roasted chicken wing (typically 20 grams) gets you 42 calories, 2 grams of fat, 6 grams of protein, and no carbohydrates. However, eating the skin adds 25-30% more calories. 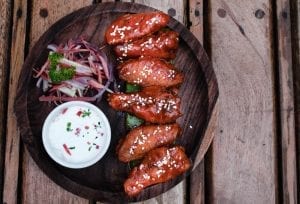 There are 159 calories, almost 11 grams of fat, 9.75 grams of protein and 5 grams of carbohydrates in a battered chicken wing.

4. They are fantastic at providing protein.

Your body needs sufficient amounts of protein for optimal health, and chicken wings provide the essential amino acids needed for just that. Protein in chicken has low collagen levels, which is one of the major compounds that gives protein structure. This makes them more digestible.

5. Tasty – but not necessarily the healthiest part!

Although chicken wings are the fattest part of the bird, the wing has a more favorable composition (due to its notable amounts of monounsaturated fatty acids).

6. Chicken feed, of course, varies too.

Most farmers feed their chicken with vegetable-derived feed (helping the meat of the chicken many long-chain omega 3 fatty acids. Promotion of brain health and prevention of inflammation is associated with these fatty acids. 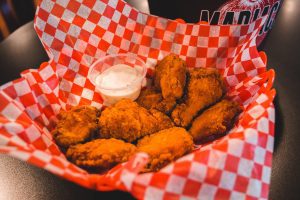 Niacin and iron are also found in chicken wings.

8. The Super Bowl is a big wing-eating occasion.

In the weeks and days leading up to the Super Bowl, more than 1.5 billion chicken wings are consumed!

What side dishes go well with chicken wings?

You can enjoy chicken wings with a variety of salad, corn dishes, onion rings, fries, and even macaroni.

Which city has the best wings in the world?

Buffalo, New York, is said to be the chicken wing capital of the planet!

Why are chicken wings expensive?

Chicken wings are often high in demand - and what’s more, they take longer to produce, prepare and ship!

Do you know any facts about chicken wings’ nutrition? Share them in the comments below!