The Jeep Wrangler has attracted a worldwide cult following – after all, it’s one of the coolest looking vehicles on (or off) road!  Here’s some interesting facts about the Jeep Wrangler for all you Jeep lovers out there…

1. It didn’t take long to design the original Jeep.

The first and original Jeep design was penned in just two days by the American Bantam Car Company in July 1940 for the US Army that was preparing for WW2 and desperately in need of a lightweight four wheel drive vehicle.

3. Believe it or not, you have Ford to thank…

It was actually Ford that designed the Jeep’s iconic and instantly recognisable grill. 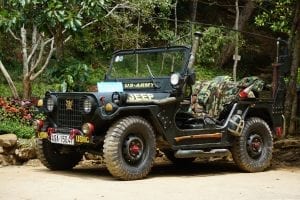 4. The Jeep was a truly inspiring vehicle.

Jeep inspired Land Rover, the Toyota Land Cruiser and the Ford Bronco. Built in 1947, the first Land Rover prototype had a Jeep chassis.

5. The word ‘jeep’ is actually a a nickname.

The definition of Jeep was derived from Ford’s “G.P.”, meaning General Purpose.

It was only after 1987 when the Jeep brand was bought by Chrysler that the Wrangler name was introduced.

The name Jeep is now so synonymous with off roading, it’s often used as a way of describing any off road vehicle.

9. We’re on our fourth Wranglers.

The current Jeep Wrangler, the JL, is the fourth generation of the off-roader. It was unveiled at the LA Auto Show in 2017. 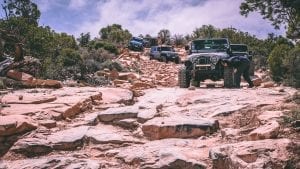 Jeep are so sure that its seven-slot grill design is an instantly recognisable logo, there is no other badging on the front of their cars.

12. Fold down the windshield!

Jeep are unlike any other vehicle on (or off) the road – they have a removable roof, doors and even the windscreen folds down on a Jeep Wrangler – roll on Summer!

There are lots of ‘Easter egg’ mini Jeep silhouettes hidden all over a modern Wrangler – including a Jeep climbing a corner of the windscreen … but can you find them all?! 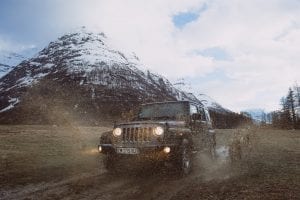 FAQs about The Jeep Wrangler

How long do Jeep Wranglers last for?

A careful owner is likely to get more than 20 years out of a new Jeep Wrangler - they really are built to last.

Do Jeeps break down a lot?

A quick search online will suggest that many people have problems with their Jeeps, however, they are not likely to cause you concerns more or less than any other 4x4.

Many claim that the 2018 Wrangler JL - the latest model - is the best, as it refines looks, safety, horsepower and more through years of research and development.

Do you know any fun facts about Jeep?  Share with us in the comments below!