Crime is something that never goes away. Sadly, there will always be a need for high or maximum security prisons in the U.K. and elsewhere. Prison breaks are less common than you might think, but for the sake of keeping an innocent public safe, it’s important that the most dangerous people incarcerated are kept far aware from causing any further harm.

There are a handful of incredibly secure prisons in the UK As violent crime and misdemeanour continue to perpetuate, it’s still important for the British justice system to keep a lid on those who are dangerous to society. Without a controversial ‘death row’ or capital punishment system in modern U.K. society, prisons need to be more secure than ever.

Here are some interesting facts about the UK’s most secure prisons, and what makes them so scary to inmates – and something of a relief to innocent citizens on the outside!

1. There are only eight prisons in the UK that are of top security.

There are eight prisons in the UK which you can consider high security. These include Woodhill, Belmarsh, Full Sutton, Wakefield, Long Lartin, Frankland, Whitemoor and Manchester (Strangeways). Of these, perhaps the most infamous is Wakefield.

2. Why is Wakefield Prison considered the most famous?

To give you a hint, it has the nickname ‘Monster Mansion’. It is here where some of the most infamous serial killers in British history have spent time or have been transferred to. It’s been open since 1594, and it’s a captive facility for 100 prisoners considered Category A, or those who are likely to be extremely dangerous. In particular, HMP Wakefield houses rapists and sex offenders. It’s rare anyone transfers here unless they have at least five years on their sentence.

‘Monster Mansion’ has housed some of the most infamous individuals of the modern era. For example, it has housed repeat offender Charles Bronson, Soham murderer Ian Huntley, ‘Doctor Death’ Harold Shipman, and Ian Watkins – former lead singer of Lostprophets, who spent time in HMP Wakefield for offenses against children. 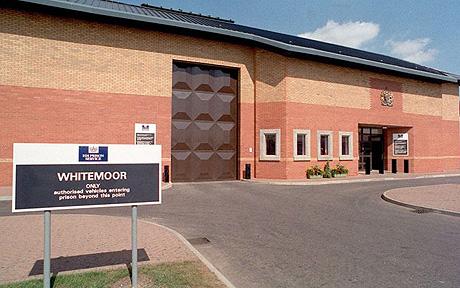 4. Where does the UK imprison terrorists?

HMP Belmarsh, meanwhile, is generally used to house prisoners convicted of terrorism offenses. Bronson and Huntley have spent time here, too. Belmarsh is also well-known for its on-site sports facilities, which are actually provided by Charlton Athletic F.C.

Belmarsh is actually one of the biggest prisons of its kind in the UK, as it can house up to 910 convicts. It is a purely male jail.

Long Lartin is slightly smaller than Belmarsh and Wakefield in that it can hold 622 male prisoners. However, it remains one of the most secure prisons of its kind in the UK. It’s based in Worcestershire, and is considered a facility for category C prisoners, most likely drug offenders. As such, it has a state of the art drug treatment program.

However, Long Lartin also has its fair share of infamous inmates. Among them are Victor Castigador, who is serving time for murder – and he also murdered a fellow inmate in 2016.

HMP Woodhill holds up to 819 convicts at any one time and is based in Milton Keynes. This prison is, much like the others in the list, one of the most secure facilities in the UK. It’s home to what’s become known as the UK’s initial managing behavior unit and runs alongside a young offenders’ institute.

HMP Woodhill has another dubious honor of being the British prison with the highest prisoner suicide rate.

HMP Manchester is truly huge – it can house up to 1,238 prisoners at any one time. It’s commonly known as Strangeways and has been part of the landscape since the 19th Century.

8. Strangeways is actually one of the most interesting prisons in the UK.

Strangeways is actually a Grade II listed building! It’s also well-known for being the site of one of the biggest prison riots of all time in the UK – a siege ensued for 25 days in 1990 before guards and authorities were able to retain control.

Strangeways wasn’t always a male-only facility. It used to bring in female prisoners, though this changed in the early 1960s. 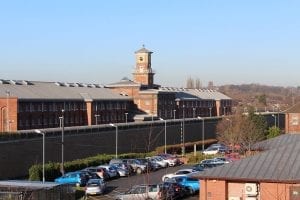 10. Whitemoor is one of the smallest, but it’s no stranger to drama.

HMP Whitemoor is based in Cambridgeshire and is a smaller facility housing up to 458 inmates. It is infamous for having played host to a series of riots and explosions, which led to lockdowns in the facility.

Are prisoners often transferred to and from secure prisons?

Sometimes, once sentenced, convicts are immediately transported to a secure prison, where they will remain until their sentence has been completed. Sometimes, additional factors result in their transfer to another establishment. Secure vehicles with specially trained personnel accompany prisoners for the journey.

Do secure prisons have hospitals on site?

Yes, three of the major secure prisons in the UK have hospitals on site. They are Ashworth, Broadmoor and Rampton. If a prisoner from a different secure prison requires hospital treatment, he will be treated at the most appropriate hospital, which may mean transfer to one of those. In the UK prisoners are treated to the same medical care as could be expected by other citizens.

Can prisoners receive money whilst in prison?

Do you know any interesting facts about the UK’s most secure prisons?  Share them in the comments below!

Do you enjoy the macabre and the unusual? Then check out these grisly facts about the death penalty