With a name like The Dead Sea, how could we miss it out? That’s what we thought, so we put pen to paper to create a list of fun facts about the Dead Sea that are sure to have you talking and Googling for days.

1. The Dead Sea is seriously salty.

The Dead Sea is up to 9 times saltier than any other sea or ocean in the world!

2. Floating in the Dead Sea is very popular.

People have described the feeling of floating in it as like a combination of olive oil and fine sand.

3. A bit of a difference there, then!

In Hebrew, it is known as the “Salt Sea”. But in Arabic, it’s called the “Sea of Death”. 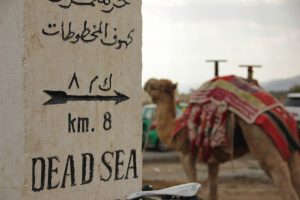 It’s located between the banks of Israel and Jordan.

5. Could the Dead Sea help you keep healthy?

People claim it helps them with a variety of skin conditions like acne and eczema. A number of people have also claimed it helps soothe muscle pain and arthritis.

The banks of The Dead Sea are populated with many luxury spas and hotels.

7. Spas have been popular here for millennia.

Herod the Great built the world’s first health spa there more than 2,000 years ago.

It’s the lowest land point on Earth. That’s because The Dead Sea is located at an amazing 423 meters below sea level.

And it means the nearby Highway 90 is the world’s lowest road…it’s 393 meters below sea level at its lowest point!

9. You’ll rarely burn out in the Dead Sea.

You’re less likely to get sunburn here because the UV has to go through more atmosphere to reach your skin. 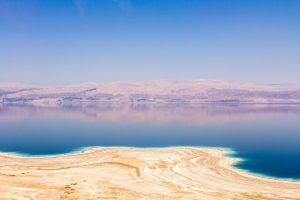 10. What are the Dead Sea scrolls?

The Dead Sea scrolls contain some of the origins of Christianity and were discovered in 1947.

The Dead Sea is so buoyant, even pebbles and asphalt blocks are pushed to the surface by the water’s salt content.

The water level is dropping by 1 meter a year and the length of the sea has halved in the last 100 years due to the water being used for nearby developments. 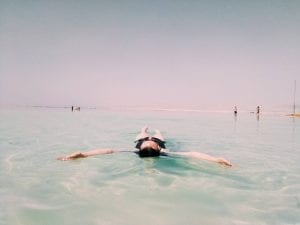 FAQs about the Dead Sea

Why is it called the Dead Sea?

It’s to do with the fact salt levels in the water prevent much marine life from living in it!

Is it possible to drown in the Dead Sea?

While you’ll float like no other in the Dead Sea, it is still possible to drown - keep an eye on the weather, and don’t drink the water.

Why is the Dead Sea so salty?

It’s to do with land rocks that erode into the water - the acids eroding from the stone eventually adds to the salinity of the water.

Do you know any fun facts about The Dead Sea?  Share them in the comments below!