Have you ever gone mountaineering in Europe before? If so, you may well have come across the Pyrenees. This famous mountain range is one of France’s peak hotspots – though there’s nothing particularly ‘hot’ about these mountains when you get up high!

If you’re looking for some curious trekking opportunities towards the West of Europe, you may well want to make a beeline for mountaineering up in this stunning range.

Whether you’ve visited this mountain range or not in the past, there are still likely to be plenty of facts and figures which might just surprise you. Here’s a stack of fun facts about the Pyrenees…

1. Andorra’s the point in the middle.

The Pyrenees are perhaps best known as being a natural border or barricade between France and Spain. However, did you know that there’s a midpoint between the two? On your travels, you may well find the tiny territory of Andorra, close to the Pyrenees.

2. The Pyrenees are long and thin.

The Pyrenees are impressively long in total, but actually aren’t that wide. If you were to measure the range in full, you’ll find that there are around 305 miles of mountains here, though it’s likely to taper down to six miles in width towards the East. That said, the range does get pretty wide towards the center, with 80 miles being its thickest measurement.

3. Farming is huge out here.

Farming tends to be fairly commonplace across the range, and in fact, it’s not uncommon that you will find sheep and goat farming across the mountains. Woolly, bleating creatures love to graze on the grass and ground surrounding the peaks and bases. 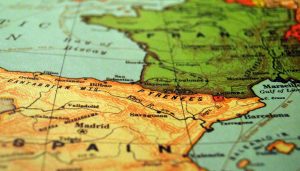 The highest point of the Pyrenees range is right up in the heavens – the peak is Pico de Aneto – and if you want to scale the whole spire, you’d need to get up to 11,168 feet!

As well as offering staggering peaks and mountain trails, adventurers will also find that there are plenty of national park experiences to take on across the Pyrenees. Funnily enough, the biggest is the Pyrenees National Park – and it’s been a part of the landscape and local tourist scene since the late 1960s.

6. France has more where these came from.

France is well-known for its huge variety of mountains and snowy peaks. In fact, the Pyrenees are only one of seven different ranges in the country, with Jura, Corsican Massif and – of course – the Alps ranges – being some of the most popular tourist sites elsewhere for mountain lovers.

The Pyrenees are replete with various villages, towns, and pilgrimage sites far and wide. In fact, you’ll find that there are towns such as Toulouse close by, as well as Lourdes, a small town which is said to have played host to the Virgin Mary on multiple occasions.

8. Some areas, however, are undeveloped and are absolutely gorgeous.

There are some areas of the Pyrenees which are completely wild and unspoilt. It’s here where you’ll be able to spy some of the most curious critters and flower species across Spain and France. The unique ecosystem between glacier, mountain and wild fields really help to build up a fantastic wild ramble or two.

While you will likely think that the Pyrenees are mainly snow-capped peaks, much of the region is actually forest and green plains. In fact, 60% of the whole range is forestry. However, unlike many other mountain ranges and National Park areas, the Pyrenees do not possess any great lakes. 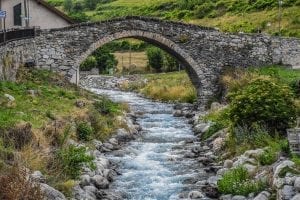 10. Start your own wildlife documentary!

Some of the stunning wildlife which call the Pyrenees home include deer, badgers, and the local brook salamander. It’s not only a wonderful region to go flower-spotting, but also to go looking for a variety of curious creatures and critters!

The name of this mountain range is also pretty intriguing. The Pyrenees are thought to be named after the legendary figure of Pyrene, who supposedly fled to the local woods and met a grisly fate. She was said to be Bebryx’s daughter – and many fans of mythology will know that Bebryx was a romantic interest of Hercules. Were the Pyrenees named after Hercules’ daughter?

The Pyrenees are well-known for their winter sports retreats. It’s a highly popular location for holidaymakers who want to get into some serious skiing, snowboarding and more. You often have to book ahead here months and months ahead of time! 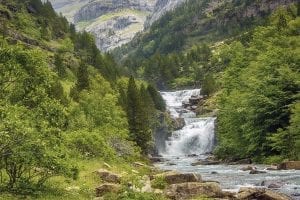 FAQs about The Pyrenees

What are the Pyrenees famous for?

Amongst many other things, the Pyrenees are massively famous for their tall and spiky peaks!

How much snow do the Pyrenees get each year?

On average, you can expect up to 4m of snow to accumulate up at the top of the peaks! That all adds up to 700m, total, across the range!

What language is spoken in The Pyrenees?

This is the Basque speaking area of south-west France and northern Spain.

Do you know any fun facts about the Pyrenees?  Share them in the comments below!