Chickens are some of the most fascinating critters we have the pleasure of sharing the planet with! While feisty fowl might not seem to be to be that special on the outside, there’s a lot going on in that bird brain!

Anyone who has kept or owned chickens will likely tell you that it’s a lot of fun with more than a few challenges in store for you, too! Before you go ahead and set up a coop or two, however, how much do you actually know about these birds? Here’s a stack of fun facts about chickens to crack into.

1. We’ve been looking after chickens for a long time.

It’s been common for people to domesticate chickens heading back centuries, even millennia. In fact, it was thought that Chinese people started domesticating the egg-layers as long ago as 6,000 BC! Therefore, chicken-rearing and egg-collecting is nothing new!

Chickens tend to display interesting laying behaviors depending on their age. When young, they will lay more eggs, but they will tend to be fairly small. The older the chicken, the larger the eggs – but the fewer you will actually receive.

3. There are some record-laying hens!

Chickens are known to lay some incredible egg piles from day to day. In fact, the record-holder laid 371 in a year – and another laid seven in a single day! We can’t imagine that was very comfortable! 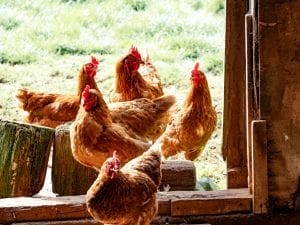 Chickens are smarter than many people think. They actually have the ability to remember faces. It’s thought that they can recall up to 100 different animals or people – more than many of us can probably manage!

5. Chickens come in all kinds of breeds.

There are more chicken breeds than you might imagine. It’s thought that there are scores of species out there, which explains different colors, plumages and more.

A female chicken has the ability to mate with a male but reject his sperm if she changes her mind at the last minute!

Chickens have pretty varied diets. Not only do they love to peck at seeds and corn, they will also happily gulp down insects and worms, too. They are true omnivores, much like we are!

Have you ever tried to bathe a chicken? Best of luck – they’re not so fond of taking a shower or bathing in water. In fact, you are more likely to scrub a chicken down in dust! That’s because it helps to keep their feathers healthy, and it’s actually a pretty good anti-parasite measure, too.

Chickens have – pardon the pun – a pecking order of sorts. This means that they can add and remove flock members and rank up and down. 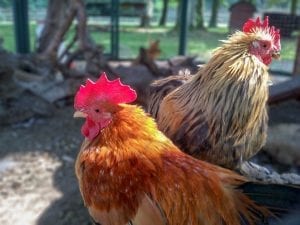 A chicken has the ability to recognize its name – meaning it’s not just your faithful dog who can do the same!

11. They have some pretty scary ancestors!

Believe it or not, there are no other animals alive on Earth today which are closer to the Tyrannosaurus Rex in terms of genetic makeup – than chickens. They’re pretty fearsome little beasts when they get their danders up in any case! The dinosaur link makes definite sense!

Some chickens do enjoy swimming, and most are able to – however, they can’t swim for long periods for fear of getting stuck and going under. Therefore, if you want to give your chicken a bit of a paddle around, it’s best to treat them to a small pool of water. 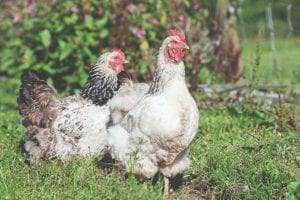 The USA is an enormous chicken consumer. It’s thought that around eight billion chickens are consumed each year across America, which makes it far superior to beef in terms of sales. Don’t underestimate the popularity of KFC!

If you thought the weird fact that humans are mostly water was strange enough, chickens are actually 15% more water than we are.

Some people have a fear of chickens and suffer from alektorophobia. We can’t blame them – ever got on the bad side of a hen or rooster before? You’d better run! 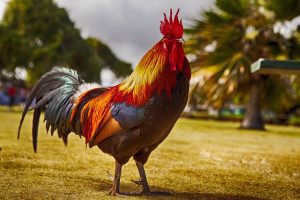 No matter the color of a chicken egg, the nutrition and calorific value will remain the same.

17. Chickens propagate all over the world.

Chickens are the most prolific bird species on the planet. There are thought to be 25 billion of them on Earth right now – that’s seven or eight chickens per person – and none of them can fly!

There are live chickens almost everywhere – but believe it or not, the only country outside Antarctica without any wild chickens is the Vatican City.

Can you keep chickens as pets?

Yes! Many people keep chickens domestically - they are actually pretty easy to care for on the whole.

Can you keep a single chicken on its own?

You can, but it’s advisable that you try and keep a flock - they are social

Do chickens enjoy being stroked?

Yes, many chickens enjoy a gentle pet or stroking, but you have to be careful!

Do you know any fun facts about chickens?  Share them in the comments below!