If you’ve never swum deep into the oceans before, you may not have come across gorgeous coral reefs.  These natural ‘sea forests’ are hugely important to the lives of millions of aquatic life swimming in and out of their various nooks and crannies.

Sadly, they are under threat now more so than ever before.  Here are some seriously fun facts about coral reefs…

Coral isn’t actually a plant – it’s more of an animal! They share plenty in common with various animals of the deep, such as sea anemones.

Coral reefs are home to extremely diverse ecosystems of creatures. However, the diversity of a reef will differ depending on the direction water is going in, and where the reef is based in the world.  No two are ever quite the same! 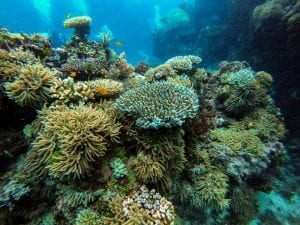 Coral reefs are massive. They are, in fact, thought to be the largest type of natural structure on Earth.

Thanks to human pollution, coral dies off, unable to claim the light and food that it needs.

It’s thought that almost 20% of the world’s coral reefs have died as a result of human poisoning.

They’ve been part of the planet for over 400 million years. Considering we’ve been here for around two million of those, it’s probably time we showed the reefs some respect!

6.    Coral reefs are eye-catching for a reason

Coral reefs are bursting with fantastic colors. That’s thanks to the algae that live within.  They help to provide crucial food to coral.

7.    The water around coral reefs is lovely

Reefs are also fantastic at helping to improve water quality. This means that they act as ocean filters!  It’s great news for species that live nearby, as well as any human swimmers!

It’s emerging that coral reefs can be safely harvested to help produce human medicine. Coral research suggests that it can help to aid bacterial infection and even psychological disorders. 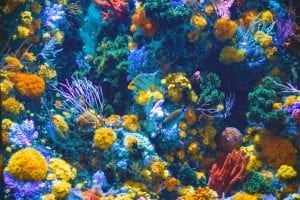 9.    The biggest coral reef in the world is a whopper

The biggest coral reef, down in Australasia, is the aptly-named Great Barrier Reef. It’s thought to make up around 10% of all coral reefs on Earth.

10. The Great Barrier Reef is a massive employer

It’s a real job provider. Believe it or not, the Great Barrier Reef helps to generate over $5.5 billion per year for the Australian economy.

There are three main types of reef. There are barrier reefs, atolls, and fringing reefs. 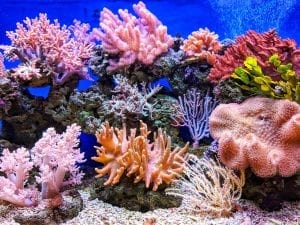 If coral reefs were to disappear, it wouldn’t just be marine life that suffers. Humans would feel the impact – as mentioned, jobs would be lost, huge amounts of tourism would disappear, and we’d even lose access to a massive food source.

You can generally split coral into soft or hard types. However, all coral is very sensitive, which is why pollution is so devastating.  Even a slight increase in temperature can kill off the coral.

Coral reefs will be crucial in the fight against global warming, too. These huge living forests provide an incredible amount of CO2 to the oceans, but at the same time, they are brilliant regulators.  Without them, things would heat up a lot quicker.

How many coral reefs are damaged?

As of writing, there are currently 70% of the world’s coral reefs that are damaged or dead.

What colors are coral reefs actually?

The colors of coral reefs depend on the area, some are even fluorescent! What actually defines the colors of the coral reefs is the mix of the zooxanthellae algae in their tissues. There are reefs of all colors such as green, yellow, red, brown, purple, pink, and of course blue.

Can we save the coral reefs?

There is a lot that all of us can do to help save the damaged coral reefs and protect the ones that we have left. A quick Google will give you plenty of ideas, even if you don’t live near the reefs yourself!

Do you know any fun facts about coral reefs? Share them in the comments below!