You’ve probably got the theme from ‘Jaws’ going through your head right now… the Great White Shark is a fearsome-looking beast, but it often gets an unfair reputation!

To clue you up on these wild and wonderful marine creatures, here’s a bumper stack of interesting facts about Great White Sharks to see if we can change your mind – there’s no need to be scared!

Great whites can whip through water at 15 miles per hour!

2. The great white is king and queen of the fish.

Great whites are considered the biggest fish predators on the planet – bar none.

3. They’re mainly found in America and Down Under.

You’ll find Great Whites drifting around in American waters, as well as in Australia and around South Africa. 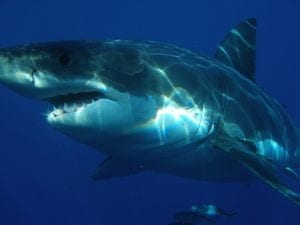 4. They can be pretty huge.

Some great whites can grow to be around 20 feet in length – and can weigh more than 5,000lbs!

5. Two fish are bigger – but are nicer on their prey.

Both basking and whale sharks are bigger than great whites, but neither are as nasty – they filter their prey.

6. The great white is very misunderstood.

The shark you’ll watch in ‘Jaws’ was actually based on a real creature – however, the great white really isn’t as brutal as the movie lets on.

Great whites are actually named for the colors of their bellies – they tend to be grey colored on top.

They have over 300 teeth – serrated – to go along with their long, bulky bodies!

9. Great whites can sniff out a target.

A great white shark has incredible smell receptors, which means they can hunt prey from very far away. 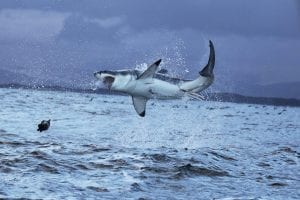 A shark’s bashiyal is a cartilage tongue, which they use to sample their prospective prey before chomping down.

Great white sharks prefer to rip into their prey and gulp them down than be gentle.

Great whites are known to eat birds, smaller fish, seals and even other sharks! 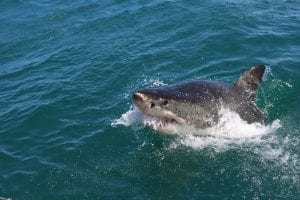 13. They have an amazing blood radar.

Great whites can sense blood from miles away, and one drop in every 100 liters.

Great whites love diving deep – they’re fast enough to manage it, and it means a wider variety of prey.

Sharks generally like ‘sampling’ their prey. Therefore, don’t be surprised if one wants to take a little bit of a nibble! 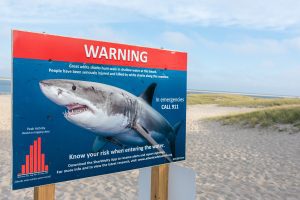 16. They genuinely won’t hunt you down.

Humans are generally only attacked by sharks if they get in the way – it’s mistaken identity.

17. They are often just being nosy!

You’ll find that great white sharks only ever follow boats because they’re interested in what’s going on. They’re not hunting you down! They bob up and down the water in a process called spyhopping.

20. We’re the predators in return.

Great whites are considered very vulnerable as a result of human fishing. Therefore, there are lots of protections in place.

A great white is known to swallow its own teeth in the womb – they grow back, but they use the added calcium to grow stronger!

23. A different way to rear young!

Great white sharks start hunting almost as soon as they are born – they are natural-born predators! 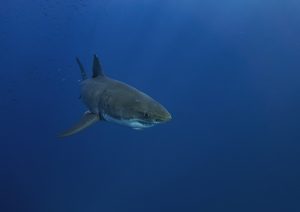 What was the biggest great white shark on record?

Are great white sharks the most dangerous to humans?

Yes, but that isn’t saying much - there are actually only just over 300 documented, unprovoked attacks from great white sharks on humans. ‘Jaws’ has a lot to answer for!

It’s to do with familiarity. Humans aren’t part of their normal food chain - they smell strange - so generally, you get left alone, and the worst you’ll receive is a nibble!

Do you know any fun facts about Great White Sharks? Share them in the comments below!

Are you seriously fasinated with sharks? Check out these amazing facts about the basking shark!