Orangutans are some of the most beautiful and docile creatures on the planet. They are also known for their intelligence and incredible agility! But we should all get to know this incredible endangered species a lot better! With that in mind, here are some fun facts about orangutans!

1. There are three types of orangutan that we know of.

There are three species of orangutan in total. As of 2017, we realized that the species of Tapanuli existed, and the other two are the Bornean and the Sumatran! Who knows if there are any more species out there that we have missed?

2. The orangutan is an endangered species.

Sadly, all three of the orangutan species are endangered. They are commonly sold and killed, making them rarer and rarer in the wild and less and less likely to survive as a species.

3. They’re probably heavier than they look!

We’ve all wanted a big, warm orangutan hug thanks to their long arms, beautiful fur, and adorable shape! But did you know that they happen to be the heaviest tree-dwelling animals on earth?! Just remember to brace your back if you try to hold them! 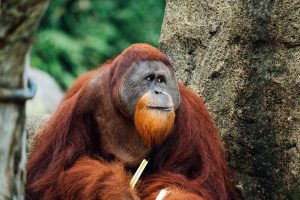 4. How long are orangutan arms?

5. They technically have four hands!

While orangutans definitely have both feet and hands, their feet do look a lot like hands! In fact, you can commonly see them using both their feet and their hands to eat. They also use their feet for climbing and gripping.

We all need our moms when we’re born, but orangutans are pretty much glued to their mothers till about the age of seven! They ride on their backs, sleep in their nests, and follow them throughout the day to learn everything that they can to survive. Due to this intense mothering, orangutans have kids usually every seven to nine years, which is the longest interval between births for any land mammal that we know of!

7. They make the bed every day!

While some (let’s be honest, few) of us make our beds every day, orangutans actually follow this rule, and they do more than just pull the covers over! They make a nest every night using branches and sometimes even make a roof during the rain! It takes them about ten minutes to make their nests, which includes weaving time!

8. They are highly intelligent beasts!

As you may know, orangutans are super-intelligent animals. They have even been seen using their own tools! They commonly use sticks to pull out food (such as termites, bees, ants, etc.) and leaves to use as gloves when reaching for food from thorny plants and fruits!

9. Orangutans can live to a ripe old age.

Ever met an old-age orangutan? In the wild, they are commonly seen living up to the ages of thirty and forty. However, there have been cases where orangutans have lived past the age of 60! 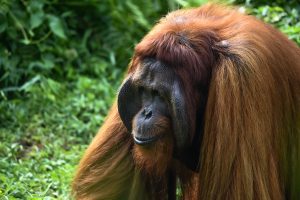 10. What does ‘Orangutan’ actually mean?

The word ‘orangutan’ comes from the Malay language. It means ‘person of the forest’. And, considering that orangutans spend most of their time in trees, this is a pretty apt name!

Are orangutans friendly to humans?

Orangutans are generally pretty friendly toward humans! They are not aggressive animals, even with their own kind. That being said, if you go to bother one of them, the chances are it’ll definitely fight back!

How many orangutans are left in the world?

Orangutans have been known to very rarely eat meat. Most of the time, they eat fruits, leaves, insects, and bark.

Do you know any fun facts about orangutans? Share them in the comments below!

This page was last modified on November 24, 2022. Suggest an edit