Snails – love them, hate them, maybe even eat them? The humble snail is a docile yet misunderstood critters, the bane of any gardener, and a famous European delicacy. Here are some fun facts about snails that might just open your eyes.

1. Do snails have teeth?

Yes, snails have up to 25,000 teeth! No wonder they munch through our vegetable patches! Fixed onto a plate known as the radula, the teeth are relatively small and rarely seen, though the damage they can wreak is seen by gardeners all over the world.

If you can see the tentacles of a snail, it’s most likely the snail can see you! Having one or two pairs of tentacles, the eyes are either at the tip or as on sea snail, the base of their tentacles. 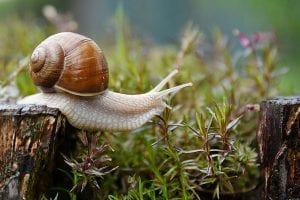 3. Snail slime is a defensive measure.

Snails produce slime as a form of self defense. Their undersides are tender so rugged or sharp surfaces can seriously harm them. By excreting this thick substance, it’s easier for them to move about without harm!

4. How do snails reproduce?

Very slowly! Snails are hermaphrodites which means they can self procreate. They have both male and female organs.

Studies show that they prefer to mate with another snail, however! Aquatic snails release sperm into the water which then swim to find female eggs for fertilization. This can be fraught with risk and problems! 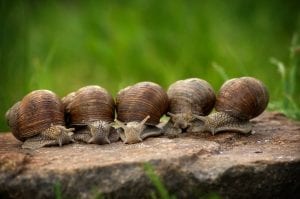 There are three types of snail – freshwater snails, saltwater or sea snails and land snails. Collectively they are known as gastropods.

6. You’d know this critter if you saw him!

The biggest aquatic sea snail is known as the Giant Whelk. It can reach a length of 35.4 inches! By comparison, an average squid measures 24 inches!

Snails cannot hear. They communicate by leaving chemical residue and detecting what’s been left by others.

Snails move by means of the powerful muscle action of the soft ‘foot’ located on their underside. This is so strong, they can climb vertically on glass windows! 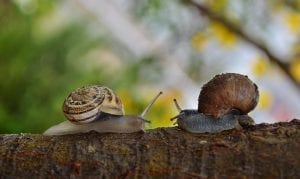 9. And yes, snails are foreign delicacies.

In several countries, humans eat snails. Either as the main ingredient of a dish or minor additive. However, did you know that Spain is the biggest consumer of snails worldwide? In 2018, France ranked third behind Morocco, too!

10. They’re actually pretty good for you!

Snails have a low fat, high protein ratio and contain all kinds of vitamins and minerals. These include vitamin A, iron and calcium. 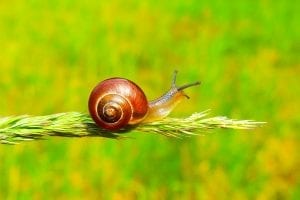 They must be cooked at a high temperature for a reasonable amount of time to kill parasites. The lungworm parasite is easily transmitted to humans when snails are undercooked. Not all snails are hosts to rat lungworm but prevention is definitely better than cure!

Researchers at the University of Utah are investigating the potential use of snails to help people with diabetes. Cone snails are being studied in connection with insulin production, application and uses.

In the Vendee region of western France, a young enterprise called Maison Royer is producing skin products based on snails. The major ingredients are produced from snail excretions and are 100% organic. 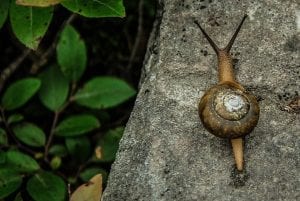 Which is the biggest snail on the planet?

There are a number of seriously large snails. The Australian Trumpet Snail is one of the heaviest, weighing up to 18kg!

Are snails omnivores, herbivores or carnivores?

Snails can be either omnivores, herbivores or carnivores. They can also be detritivorous! This means that they will eat decayed matter. In fact, they will eat almost anything to survive.

Yes, some snails are on the endangered list. Pollution and climate change are increasingly affecting their habitats. In the UK, for example, the ‘Roman Snail’, also known as Helix Pomatoe, is protected under article 5 of the Wildlife and Countryside Act. Think twice before you squash one - they need our help!

Do snails have eyes?

Yes, a snail's eyes are attached to the end of their long tentacles on top of their heads.

Do you know any fun facts about snails? Share them in the comments below!