The Statue of Liberty, an iconic US national monument, welcomes approximately 4.5 million visitors every year.  If you’re considering a visit, you’ll want to learn these fun facts about Lady Liberty:

The Statue of Liberty was a gift to the people of the United States from the people of France to recognise 100 years of friendship between the two nations.

It was built in Paris and then shipped to the USA in 1885.  It now stands magnificent on Liberty Island in Manhattan, New York. 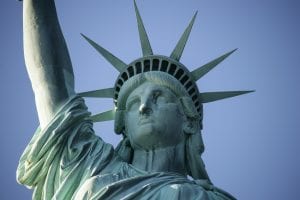 4. The genius behind another French landmark helped create the Statue of Liberty.

It was Gustave Eiffel, the designer of the Eiffel Tower, that was responsible for the supporting iron framework of the Statue of Liberty.

6. You’ll see it if you break change in the US.

The Statue of Liberty appears on the $10 note.

The total height from the ground to the top of the torch is 92.99 meters (305 feet and 1 inch).The Statue of Liberty was the tallest iron structure ever built at the time of its construction (1886).

There’s a lift inside if you don’t fancy climbing the 354 steps up to the crown.

The Statue of Liberty was restored in the 1980s.  To finish her off, the torch was completely covered in a thin layer of 24k gold! 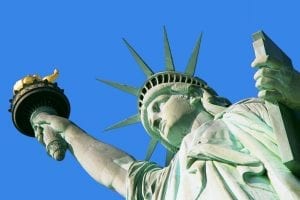 The crown’s 7 points represent the seven seas and the seven continents of the world.

11. In fact, Lady Liberty herself is a known goddess.

12. Ever snooped at her tablet?

The tablet she holds is inscribed “July 4th, 1776” – the date of American Independence. 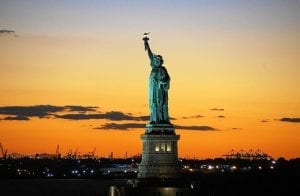 Since she was first erected in 1886, the statue has attracted about 600 lighting strikes every year!  A New York photographer, Jay Fine became the first to capture this on film.

14. You’ll have seen the statue many, many times on the big screen.

The Statue of Liberty has featured in lots of famous films including Titanic, Ghostbusters, and, of course, Planet of the Apes (spoilers!).

Lady Liberty will be celebrating her 140th birthday in October 2025! 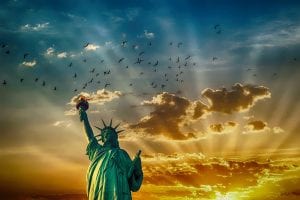 Up until 1902, the statue operated as a lighthouse.

17. It’s an important point of heritage.

UNESCO listed the statue in 1984 as a World Heritage Site.

18. You can take a look around for yourself!

Want to take a close up look at the Statue of Liberty? To get the ferry to Liberty Island, adult tickets cost $19.25.  An additional $3 fee to access the crown is also charged.  Find out more on the National Monument website.

FAQs about The Statue of Liberty

Did Egypt reject the Statue of Liberty?

Yes! It’s thought that Egypt didn’t wish to take on the statue as its costs were too high.

What is inside Lady Liberty?

The statue’s interior is largely structuring and staircases - a bit boring, we’re afraid!

How much is the Statue of Liberty worth?

The Statue of Liberty is said to be worth around $227,000, but that’s if you were to sell all of its parts for scrap!

Do you know any fun facts about the Statue of Liberty?  Share them in the comments below!

Are you considering a trip to New York? You might want to check out these awesome facts about Central Park