Like to know a little more about the capital cities of the world? Take a look at these 13 fun facts about Baku!

Baku is the capital city of Azerbaijan.

Wondering how to say the name of this wonderful city? It’s pronounced Bah-koo. 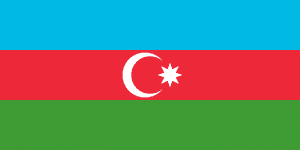 Baku’s population was 2,236,000 in 2016…that’s just over 1/4 of the population of Greater London and gives it a population density of around 2800 residents per square mile.

6. What do city denizens call themselves?

Residents of Baku are known as Bakuvians or Azerbaijanis.

7. The weather is fairly unpredictable.

Bakuvians enjoy a temperate semi-arid climate with strong winds throughout the year, warm and dry summers, cool and wet winters, a large temperature variation and an average annual temperature of 59.1°F.

8. Here are the compass details.

Baku is rich in history – it has actually been an ancient trade route since Roman times where goods would be traded between Central Asia and the west!

Make sure you visit the Naftalan Spa if you’re in Baku; if you’re looking for an unusual spa experience then this is definitely for you! Popular since the 6th Century BC and said to heal everything from impotence to skin issues, bathing in crude oil is a once-in-a-lifetime experience!

The official language of Baku is Azerbaijani.

12. Get that money exchanged! 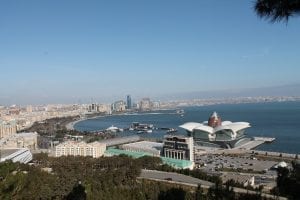 Azerbaijan welcomed 2,160,000 tourists into the country in 2014, many of whom visited Baku for its rich history and stunning modern buildings, including the Flame Towers!

Is Baku safe to visit?

On the whole, Baku is as safe as most cities to visit as a tourist. However, be as wary as you normally might for petty crime.

Is it legal to drink alcohol in Baku?

You can drink alcohol in Baku in many places, however, it’s forbidden in places of worship for obvious reasons.

Is English spoken in Baku?

It’s rare you’ll find people who speak English in Baku - so brush up on your Azerbaijani!

Do you know any fun facts about Baku? Share them in the comments below!