If you’re a thrill seeker or an adrenalin addict Alton Towers Resort is the place for you. With a fascinating history behind it, the Alton Towers theme park in Staffordshire is one of the most popular tourist attractions in the UK. Inspired by Disneyland, the modern park has been a home of fun, entertainment, and adventure for almost 200 years.

It’s more than a theme park – it’s a place to create new memories with your family and friends. Here’s 22 fun facts about Alton Towers to help you understand its past and the present:

1. Its history goes far beyond being just a theme park!

It was the 15th Earl, Charles Talbot, who tamed the landscape surrounding the Towers.

Charles ensured that every detail and plan was original, and only consulted artists to avoid imitation.

2. It was owned by the same family for five centuries.

The gardens were first opened to the public in 1860 and thirty years later, garden fetes were attended by 30,000 people. 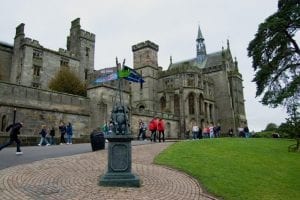 The Shrewsburys sold the house and the remaining land in 1924 to a consortium of local businessmen.

The main shareholder was William Bagshaw who was an estate agent from Uttoxeter. After he died it was taken over by his two sons, Denis and Anthony.

5. The gardens got big makeovers.

In 1924 the House and Gardens form Alton Towers Ltd. The gardens were restored and attracted crowds throughout the twenties and thirties.

6. It even helped during wartime.

At the beginning of World War II, the house was requisitioned as an officer cadet training camp.\

7. In fact, it was war office property for a while!

The house and grounds remained under the control of the war office until 1951.

The gardens reopened in 1952. The house now had tea rooms which operated in the once-grand Banqueting Hall and traveling funfair rides.

In 1973 John Broome entered the scene when he married the daughter of Denis and became involved with the family business. Shortly after he was able to buy a majority stake in Alton Towers.

Broome had the vision to transform the historic estate into a brand new leisure attraction.

9. The theme park really started coming to life in the 70s and 80s.

The 1970s were a progressive stage in the development of Alton Towers with many of the rides and areas that we see today.

The Corkscrew rollercoaster was opened in 1980.

In the 1980s there was a massive site development introducing the Pirate Ship, Log Flume, Black Hole, Enterprise, Congo River Rapids, Vintage Car Ride, Tea Cups, Skyride, and Monorail. Many of these rides still exist on the site today.10. A big takeover in the 90s moved the resort in a whole new direction.

10. In 1990 Alton Towers were acquired by the Tussauds Group.

In the 1990s there were even more investments and developments, with rides such as the Runaway Mine Train, Haunted House, Energizer, and Ripsaw. Major rides such as Nemesis (1994) and Oblivion (1998) were also installed during this time. 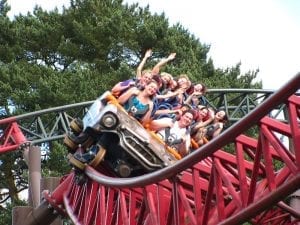 11. They even started taking guests by the mid-90s!

Alton Towers Resort is part of the Merlin Entertainments family.

It’s the largest theme park in the UK, spanning on 910 acres of land.

Alton Towers Resort is home to over 40 rides and attractions, for guests of all ages. 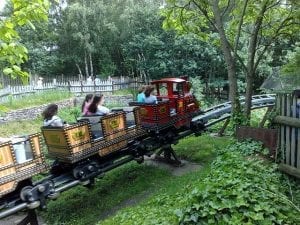 Ten main rollercoasters are the stars of the show, designed to thrill and delight anyone brave enough to ride.

15. However, it’s also a hit with younger kids.

With 20 attractions aimed at young children and families, Alton Towers is the only place in the UK where you can meet some of CBeebies’ best-loved characters.

16. There are plenty of different zones. 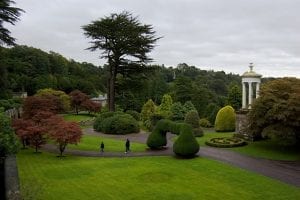 The Skyride enables visitors to travel between Towers Street, Forbidden Valley, and The Towers Complex in a colorful cable car gondola.

The Spinball Whizzer, a custom-designed spinning coaster is the centerpiece of Adventure Land since 2004.

19. Some of the rides cost a lot of money to raise.

Thi3teen is one of the most expensive Alton Towers rides, costing around £15 million. It was the world’s first vertical free-fall drop roller coaster and features a 5-meter drop in total darkness. 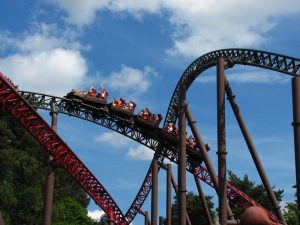 The Smiler rollercoaster in the X-sector area of the Staffordshire theme park was the biggest investment for a ride at the resort, costing £18 million to build. It has the following features: 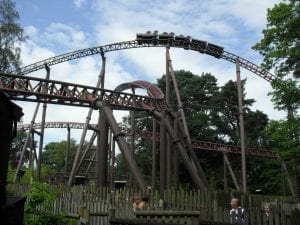 Can you visit Alton Towers and not go on rides?

Yes - there’s plenty to see here without going on rides, but you can expect to pay the same rates.

Does Alton Towers ever close in bad weather?

No! It’s open no matter the weather, however, some rides may close temporarily.

Can you bring alcohol into Alton Towers?

Do you know any fun facts about Alton Towers?  Share them in the comments below!