The Adriatic Sea sparkles calm and clear, with an intoxicating blue color.  Warm, and yet refreshing and peaceful enough to hear your own thoughts by the shore!

The tamest beaches are made of round pebbles, and the wildest one of rocks, thus the beautiful see-through water. But that’s not all! There’s so much more to its beauty and calmness! To find out a bit more, read these fun facts about The Adriatic Sea…

1. Where does its name come from?

The name ‘the Adriatic sea’ In Latin sounded as Mare Hadriaticum, and it supposedly took its name from the name of the town of Adria, or Hadria.

The Adriatic has been of great importance in the historical development of Mediterranean Europe and is of considerable scientific interest in itself.

3. Where exactly is the Adriatic?

The Adriatic Sea is separating the Italian Peninsula from the Balkan Peninsula. It’s a part of the Mediterranean Sea.

In the southeast, the Adriatic Sea connects to the Ionian Sea at the 72-kilometer (45 miles) wide Strait of Otranto.

The Adriatic extends northwest from 40° to 45° 45′ N., with an extreme length of about 770 km. The northern part of the Adriatic Sea is very shallow, and between the southern promontories of Istria and Rimini, the depth rarely exceeds 46 meters.

4. The Adriatic Sea is massive.

The western coast is Italian, while the eastern coast runs mostly along with Croatia, but lesser parts belong to Slovenia, Bosnia and Herzegovina, Montenegro, and Albania.

6. Lots of rivers flow into the Adriatic.

The deepest part of the sea lies east of Monte Gargano, south of Dubrovnik and west of Durrës where a large basin gives depths of 900 m and upwards, and a small area in the south of this basin falls below 1,460 m.

The average depth of the sea is estimated at 240 m.

8. It’s breezy out here to say the least!

The main winds prevailing in the area are the bora, a strong northeast wind that blows from the nearby mountains into the sea, and a south-eastern wind named the sirocco that is less troublesome from a navigational point of view.

9. Keep your eye on the weather forecast!

During the six winter months, bora and sirocco alternate, with or without an interval of a few days calm. 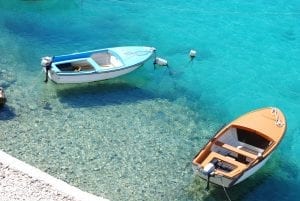 The tides of the Adriatic, which have been intensively studied, follow a complicated pattern, sweeping into the region from the south and being linked with those of the Ionian Sea.

The sea currents in the Adriatic are warm. They move from the south of Croatia to the north, and along the Italian coast from the north to the south.

A distinctive feature of the Adriatic Sea is the transparency of the waters, which is among the highest in the world and amounts to 56 meters! 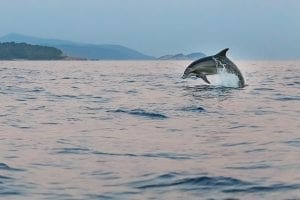 13. The Adriatic is highly salty.

The salinity of the waters is also higher than the average in the world and equals 38 per mile.

14. It varies wildly from coast to coast.

The west shore is generally low, merging, in the northwest, into the marshes and lagoons on either hand of the protruding delta of the river Po, the sediment of which has pushed forward the coastline for several miles within historic times.

The east coast is generally bold and rocky, with many islands. South of the Istria Peninsula, the island-fringe of the east coast extends as far south as Dubrovnik.

15. Adriatic islands may be narrow, but peak high.

The islands, which are long and narrow (the long axis lying parallel with the coast of the mainland), rise rather abruptly to elevations of a few hundred feet, except for a few larger islands like Brac (Vidova Gora, 778 m) or the peninsula Pelješac (St. Ilija, 961 m).

16. The vast majority of islands in the Adriatic are uninhabited.

There are over a thousand islands in the Adriatic, 66 of which are inhabited.

17. Most of the islands are actually Croatian.

Out of 1233 islands, ridges, and the reefs of the Adriatic Sea, 1185 islands belong to Croatia.

The islands are called “the pearl of the Adriatic.”

The Adriatic’s shores are populated by more than 3.5 million people. The largest cities are Bari, Venice, Trieste, and Split. 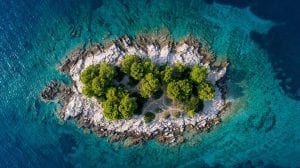 The Adriatic Sea is made by the human measure. Even the largest towns have promenades made for strolling and idling.

The average summer temperature of the Adriatic Sea is between 22-26 degrees Celsius.

21. There are many different species out here.

The unique nature of the Adriatic gives rise to an abundance of endemic flora and fauna. There are more than 7,000 animal and plant species in the Adriatic Sea. 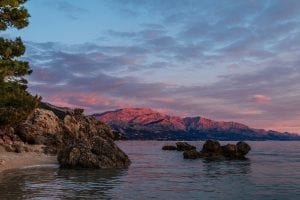 Fisheries and tourism are significant sources of income all along the Adriatic coast.

The Adriatic Sea fishery’s production is distributed among countries in the basin.

450 species of fish live in the Adriatic Sea, including 120 species threatened by excessive commercial fishing, a problem exacerbated by pollution and global warming.

FAQs about The Adriatic Sea

Is it safe to swim in the Adriatic?

Generally, yes - it’s safe to swim in the Adriatic, and there are very few sharks!

What is it that makes the Adriatic blue?

The striking blue color of the Adriatic is largely created by a lack of ammonia and an abundance of CO2.

Is the Adriatic the clearest sea in the world?

Many believe the Adriatic to be the clearest sea, but research states that honor may actually go to the Weddell Sea, in Antarctica.

Do you know any fun facts about the Adriatic Sea? Share them in the comments below!