Apollo 11 is probably the most iconic space mission ever. It’s been featured in more movies than you could watch in a lifetime, and the truth is even weirder than you might think. Here’s eleven interesting facts about Apollo 11.

1. Kennedy didn’t have his heart set on the heavens.

JFK told the head of NASA in private that he wasn’t interested in space. He just wanted to beat the Soviets in a propaganda war.

The astronauts could only get life insurance by hawking their autographs. Their original autographs have sold for upwards of $30,000 – not bad at all!

3. Who was on the famous voyage?

Apollo 11 launched from Cape Kennedy on July 16, 1969, carrying the two first ever men to walk on the Moon, Neil Armstrong and Edwin “Buzz” Aldrin.

The third man who went all the way and never set foot on the Moon was Michael Collins. 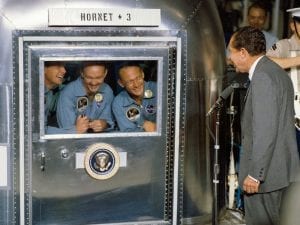 4. Very few have followed in their footsteps.

In total, only 12 people have ever walked on the Moon!

5. Collins made incredible history on his own.

When Collins went around the dark side of the Moon solo he was the most remote human being in history.

Neil Armstrong would be offered in excess of $1 million to give after dinner talks. He repeatedly declined, preferring to teach at university instead.

7. Who created the suits?

Playtex won the contract to design the space suits. Before Apollo 11, they were best known for making bras.

8. What was the name of the rocket that helped launch Apollo 11?

The 3 astronauts were lifted into space by the cutting edge Saturn V rocket.

It was so powerful NASA were worried about an explosion killing the crowd of spectators!

9. The blast radius was enormous!

They estimated shrapnel could travel up to 3 miles – so they positioned the crowd 3.5 miles away — clever! 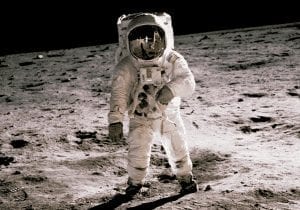 Buzz Aldrin read the Gospel of John when he touched down on the Moon.

11. Armstrong was an improviser – thankfully!

Neil Armstrong broke the handle off a breaker switch by hitting it with his backpack.

They were only able to leave the Moon because he found a felt tip pen he could jam in to close the breaker!

How did Apollo 11 return to Earth?

Apollo 11’s return to Earth was helped by the Eagle landing craft - which they used to lift off and jettison to propel away again.

Is Neil Armstrong’s flag still on the Moon?

It’s hard to say - apparently, five out of the six US flags planted in the Moon’s surface are still standing.

Did Apollo 11 leave a mirror on the Moon?

Among other things, Aldrin and Armstrong left a huge panel of mirrors on the moon - which acts as a laser reflector, allowing NASA scientists to measure the distance from afar!

Do you know any fun facts about Apollo 11?  Share them in the comments below!

Are you fascinated with space? Check out these incredible facts about the Milky Way